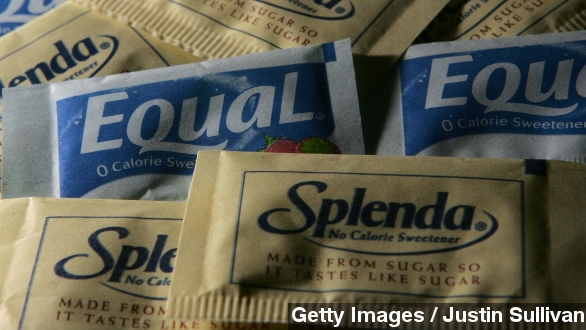 How often have we been faced with this decision? Artificial sweetener or real sugar ...

Well, it might not matter. According to a recent study published in the journal Nature, using a zero-calorie sweetener isn't any better for you.

Researchers in Israel found that consuming these artificial sweeteners can disrupt microbes, or good bacteria, that lives in the gut. This can cause higher blood sugar levels and eventually diabetes.

This is pretty big news for the diabetic community. Artificial sweeteners have previously been recommended as helpful for those with Type 2 diabetes.

Artificial sweeteners first became popular over a century ago as a "healthier" alternative to sugar. To this day, they are heavily used and can be found in diet sodas, sugar-free candy and cereals.

But several studies are now suggesting they do more harm than good. Artificial sweeteners have been linked to cancer, heart disease and now diabetes.

USA today reports researcher Eran Elinav said in a telephone news conference he used to use artificial sweeteners because he thought they were "at least not harmful and perhaps even beneficial," but he gave them up after this study.

The study has been stirring up some controversy. The Guardian points to some scientists who doubt the outcome because many of the findings came from studying mice. The director of the Metabolic Diseases Unit at Cambridge University said, "It mostly reports findings in mice, accompanied by human studies so small as to be difficult to interpret."

Researchers did note their work needs to be repeated before they can be certain artificial sweeteners can cause diabetes.

This video includes images from Larry & Teddy Page / CC BY 2.0 and Getty Images.