One Man's Plan To Fix Contempt In Politics 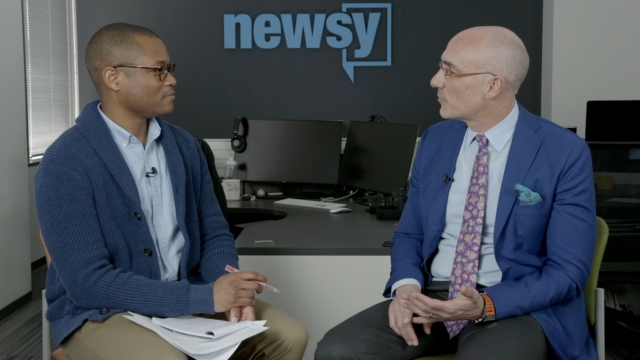 "When we were this divided in the 19th century when institutions were weaker it did lead to Civil War, thank God, you know thank God we've made progress and so we're not on the brink of that," said Author Brooks. "And I think that we can come back from this I really do think we can make progress."

Americans are divided and Washington is ground zero. So it would seem unlikely that a D.C. think tank leader would start a movement to get people in the country to rethink the way they disagree, but that's just what Arthur Brooks is attempting to do.

"What I'm doing about the terrible polarization is I wrote this book, "Love Your Enemies," and it's just what it says you know, the whole idea that we need something subversive today to turn the corner on this," Brooks said. "Look, 93% of Americans say they hate how divided we've become as a country. Unfortunately the seven percent that don't hate it are driving the bus, I mean they're setting brother against brother in this country. I mean it's fine for us not to agree, agreement leads to mediocrity, it shuts down the competition of ideas."

Brooks has spent decades covering public policy an is winding down his role as President of the American Enterprise Institute this year.  In his book, he writes that part of America's problem with contempt can be traced the remaining seven percent of people who profit off of division and hatred.

"They're getting famous and their getting prestige from this terrible climate," Brooks said. "That's what I want to fight back against. "I want a new kind of American populism, a populism of love and understanding  and respect and warmheartedness."

"Yeah sure," Brooks added. "We're talking about sort of the opinion media that's making big money in cable TV and especially what's going on in social media, a lot of people who are profiting, not in terms of money but were they really get the juice is from clicks and popularity and changing public opinion and you know that leads to all sorts of tyranny and bullying that's going on right now and most of us hate it but we don't know what to do."

According to an NBC/Wall Street Journal poll 80% of people believe the country is divided. Nine out of ten people surveyed said the political divide between Republicans and Democrats is a serious problem. But even with all this political noise, Brooks says there's a simple solution.

"So now people are sending their kids to colleges that most closely align with their political point of view, they move into neighborhoods, they go to churches [and] they kind of select their friends and that's a really bad situation," Brooks said. "So one of the key things that I recommend is sure, get inputs from stuff you disagree with so you can understand how the other side thinks, not so you can get evidence that they're stupid and evil but so you can really understand. But the best way to do that is get more friends."

Although it's a challenge to start any national movement, in these polarizing times, it would require patience, warmheartedness and a willingness to change. Something Brooks is planning to dedicate the rest of his life towards.

"We have an opportunity to love each other more, to bring the country together, not to agree because agreement [is] bad," Brooks said. "Agreement is monopoly [and] it's not what we seek but to share our ideas to share disagreement in a way that actually in a way where iron can sharpen iron when we can be stronger. Every single person watching us is a leader, are we going to be good leaders or not?"