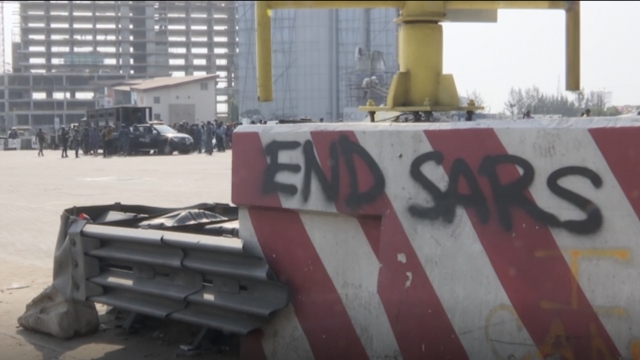 "Nigerian government why are they arresting us?" protester Anjorin Seye Joseph said. "We are just here to let them know in remembrance of those people that were killed last year, they are not doing anything against it. Is this how they are going to keep (us) silent?"

Nigerian government asked supporters to put off renewed protests at the Lekki toll gate in Lagos. Then they cracked down on those who didn't comply, beating them with sticks, confiscating posters and arresting people as they showed up to demonstrate.

Last year, thousands of young Nigerians marched to demand the dissolution of a government security unit. The Special Anti-Robbery Squad - or SARS - was set up in 1992 to fight armed robberies and other serious crimes. But the unit itself was heavily criticized for widespread criminal conduct, including committing the same crimes it was created to fight.

The protests, under the #EndSARS slogan, had continued even after Nigeria's government announced the unit's dissolution. They intensified anew after the October shooting.

Now the #EndSARS movement is fighting a judicial panel's decision to reopen the toll gate, while still investigating reports of police brutality. Protesters say the gate reopening is ill-timed and inconsiderate to last October's victims.