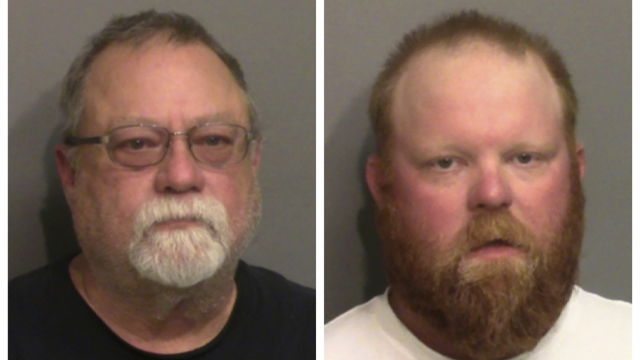 Authorities in Georgia have arrested a man and his son for the fatal shooting death of Ahmaud Arbery in February.

"Yesterday evening, agents from the Georgia Bureau of Investigation effectuated an arrest on two individuals, Greg and Travis McMichaels, charging them with both felony murder and aggravated assault in regards to the killing of Ahmaud Arbery back in February of 2020 here in Glynn County. We became involved in this case late Tuesday evening, approximately 9:30 or so when we were formally requested to get involved, and we hit the ground running pretty hard Wednesday morning," Reynolds said.

Family members of Arbery say the shooting was a hate crime, given that Arbery is a black man and the other men involved were white. Reynolds says Georgia does not have hate crime laws.

Authorities say Arbery was out jogging when the two men, as well as a neighbor in a truck, started chasing him. The men told law enforcement they thought Arbery was involved in some break-ins in the area.

In this video — and we want to warn you that some of the visuals are graphic — which became public earlier this week, Arbery can be seen running down a road when the truck stops in front of him with the men armed. There's a fight between Arbery and one of the men, and Arbery is shot and killed.

Reynolds says the video will play an important role in the investigation.

The video has sparked backlash and demands from the public and politicians for answers as to why the McMichaels had not faced any charges prior to the video being released.

According to NBC News, one of the prosecutors who first handled the case, defended the actions of the McMichaels and their neighbor, arguing the men had "solid first hand probable cause," to suspect Arbery.

Arbery's family expressed relief at the arrests on Friday.

"It took a lot of relief off our family because we just was devastated. These killers like that shouldn't do.. a lynching. Lynching Ahmaud like that to a young man, and they were still walking around here free. It was just devastating our family," Arbery's father, Marcus Arbery Sr. said.

The case is now reportedly being handled by the district attorney in nearby Liberty County, rather than Glynn County, where the shooting happened. The Georgia Bureau of Investigation says the case is an active ongoing investigation.