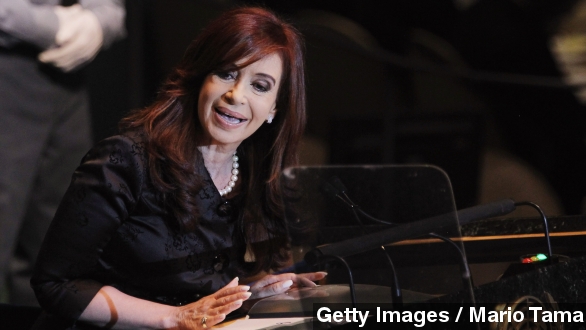 SMS
Arrest Warrant For Argentine President Found In Trash
By Kate Grumke
By Kate Grumke
February 3, 2015
Investigators found a draft of an arrest warrant for Argentina's president in the apartment of the deceased prosecutor who accused her of a cover-up.
SHOW TRANSCRIPT

There's a new twist in an unfolding case in Argentina. Investigators found an arrest warrant for the nation's president at the apartment of deceased prosecutor Alberto Nisman.

The draft of the warrant was found in the trash at the Buenos Aires apartment where Nisman was found dead last month.

The documents call for the arrest of President Cristina Fernandez de Kirchner for covering up the role of Iranian officials in the 1994 bombing of a Jewish community center in Buenos Aires. (Video via Al Jazzera)

Nisman had accused Fernandez of the cover-up just a few days before he was found dead of a gunshot wound. He was set to testify before Congress about the case the next day. (Video via InfobaeTV)

The case has engulfed Argentina in protests, with many calling for Fernandez's resignation. (Video via Argentina Independent)

So far, the president's responses have added even more twists to a story that already reads like a spy thriller.

At first she called Nisman's death a suicide. Then she took that back, calling it the "suicide I'm convinced was not a suicide" on her Facebook page.

Then, in a televised address, Fernandez called for a dissolution of Argentina's equivalent of the FBI. (Video via Casa Rosada)

She wrote on her blog that rogue intelligence officials fed Nisman false information, which is what he based his accusations on. She says they then killed him to make her look bad.

President Fernandez still hasn't commented on the discovery of the arrest warrant. She's currently on a diplomatic trip to China. (Video via Casa Rosada)