This Elite Army Regiment Is No Longer Boys-Only 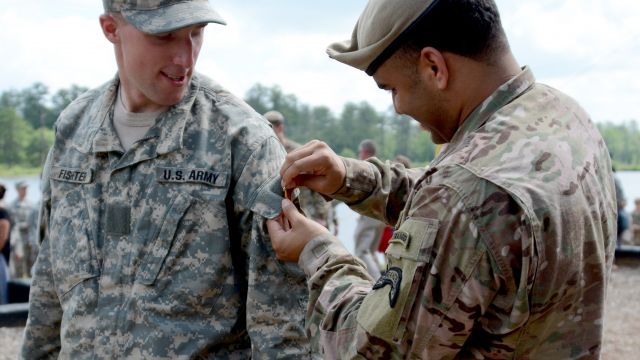 A woman successfully met the 75th Ranger Regiment's requirements more than a year after all combat roles were opened to women.

This spring, one woman will become the first female soldier to don a tan beret as a member of the Army's elite 75th Ranger Regiment.

The first comes a little over a year after all U.S. combat positions opened to women who could meet the requirements to hold them.

White House In Favor Of Women Registering For Draft

Both the White House and the Pentagon say the Selective Service System should register eligible women for a potential military draft.

The Army hasn't released the woman's name or rank, but she successfully passed a Ranger Assessment and Selection Program (RASP) designed to weed out soldiers who could not meet the regiment's extreme demands.

The regiment is considered the Army's premier raid force, but it has a somewhat vague mission: "to plan and conduct special missions in support of U.S. policy and objectives."

Women have been "attached" to Ranger operations in the past, but no woman has ever been considered a part of the regiment.

The women in support roles were typically members of Cultural Support Teams. They deployed with special ops teams in Afghanistan to search and gather information from Afghan women.