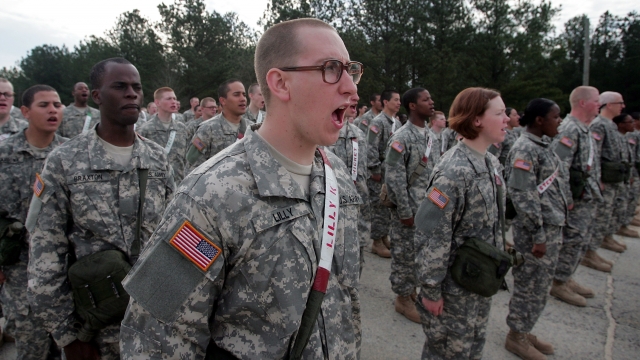 The U.S. Army has reached its enlistment goal for 2019 after failing to meet its target last year.

Army leaders told The Associated Press that they expect to exceed the Army's 2019 recruitment goal of 68,000 new troops by the end of September. The Army missed its target in 2018, managing to only get around 70,000 of its goal of 76,500. It marked the first time in more than a decade that the country's largest military branch failed to reach its recruitment goal.

Army officials say enlistment fell because of young people's shifting attitudes about serving in the military, as well as competition from a strong labor market. In an effort to reach more young people, the Army has greatly expanded its online marketing strategies, with 90% of its marketing budget now being used for digital ads. It's also started tailoring its recruitment and advertising strategies to resonate more in certain areas. That includes educating recruiters on an area's demographics ahead of time so that they can potentially draw in more potential recruits.

Officials said those efforts have improved enlistment numbers in more than a dozen cities so far, including New York, Los Angeles and Chicago. They said the aim for next year will be to get between 68,000 and 69,000 new recruits, with an ultimate goal of reaching about 490,000 members by 2024.