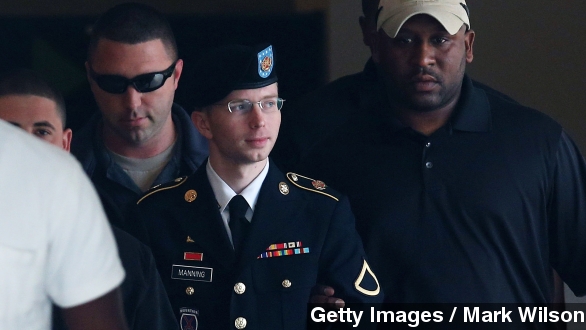 In what's being called a first for the U.S. Army, officials at Fort Leavenworth have approved hormone therapy for convicted national security leaker Chelsea Manning.

USA Today obtained a memo written earlier this month by one of the base's top officials, saying, "After carefully considering the recommendation that (hormone treatment) is medically appropriate and necessary, and weighing all associated safety and security risks presented, I approve adding (hormone treatment) to Inmate Manning's treatment plan."

Manning was arrested in 2010 of passing classified documents to the website WikiLeaks and was held for three years before being convicted on most of the charges.

The day after receiving a 35-year prison sentence, the former Army Private First Class released a statement announcing her intension to live as a woman.

The statement was first read on NBC's Today show: "I am Chelsea Manning. I am a female. Given the way that I feel, and have felt since childhood, I want to begin hormone therapy as soon as possible."

Manning sued the Army last year for denying hormone treatment despite the Army's own doctors diagnosing her with gender dysphoria.

The American Psychological Association's diagnostic handbook recently changed the way it discusses gender dysphoria. Basically, being transgender is no longer considered to be a disorder. Instead, the problem is the "clinically significant distress" people experience when there's a mind-body disconnect.

A report from The Williams Institute last year found that stress can cause transgender people to be at much higher risk for major depression and self-harm. The report said close to half of transgender people attempt suicide at some point in their lives.

Because gender dysphoria is a diagnosable disorder, and because hormone therapy is an approved treatment, Manning's lawyers argued that the military was denying her the treatment "without any medical basis."

The director of a transgender advocacy group told USA Today, "The Army's decision means it is simply fulfilling its obligation to provide Manning with medical care. ... 'If she has a heart attack, they have to treat that, too.'"

Manning had another big announcement this week: that she would be writing a column about transgender rights and freedom of information for The Guardian. No word on when the hormone treatments will begin.

This video includes images from Getty Images, the U.S. Army and F.Rdec / CC BY SA 3.0.