Armed Man At US Capitol Shot By Police 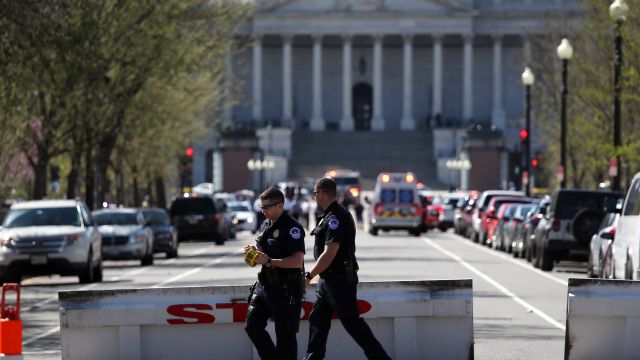 SMS
Armed Man At US Capitol Shot By Police
By Katie Link
By Katie Link
March 28, 2016
According to the chief of Capitol Police, the suspect frequented Capitol grounds.
SHOW TRANSCRIPT

The U.S. Capitol Complex was on lockdown Monday afternoon after reports of gunfire inside the Visitor Center.

Early reports indicated an officer was shot and wounded and that the suspect was in custody.

Officials later said the male suspect was shot by Capitol Police and transported to a hospital where he was undergoing surgery. A bystander suffered minor injuries and was also taken to the hospital. No officers were injured.

"We were just putting our belongings on the security conveyor belt to go through, and all of a sudden, it was just a scramble with people yelling and screaming," a witness told WUSA.

"What we’re told here, and you make the point about metal detectors is that this happened just as you enter the Capitol Visitors Center presumably before you get to the metal detectors themselves," NBC’s Pete Williams reports.

The chief of Capitol Police told reporters the lockdown was lifted about an hour after it was enacted. "Based on the initial investigation, we believe this is an act of a single person who has frequented the Capitol grounds before, and there is no reason to believe this is anything more than a criminal act," Chief Matthew Verderosa said.

The Visitor Center is an underground complex east of the Capitol building. The White House was also put on lockdown Monday as a precaution, according to The Washington Post.