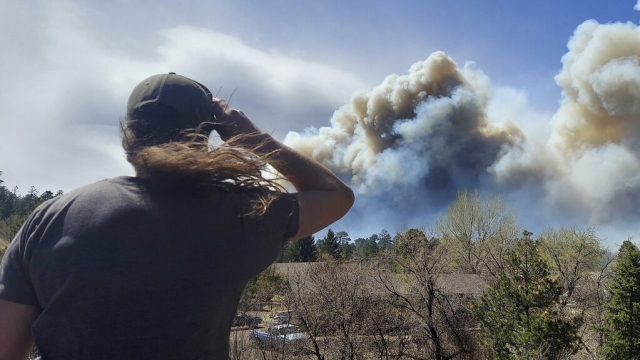 An Arizona wildfire doubled in size overnight into Wednesday, a day after heavy winds kicked up a towering wall of flames outside a northern Arizona tourist and college town, ripping through two-dozen structures and sending residents of more than 700 homes scrambling to flee.

Flames as high as 100 feet on Tuesday raced through an area of scattered homes, dry grass and Ponderosa pine trees in a rural area on the outskirts of Flagstaff as wind gusts of up to 50 mph pushed the blaze over a major highway.

No significant precipitation is in the forecast into next week, Stubblefield said.

Coconino County officials said during a Tuesday evening news conference that 766 homes and 1,000 animals had been evacuated. About 250 structures remained threatened in the area popular with hikers and off-road vehicle users and where astronauts have trained amid volcanic cinder pits.

"It's good in that it's not headed toward a very populated area, and it's headed toward less fuel," Smith said. "But depending on the intensity of the fire, fire can still move across cinders."

Authorities won't be able to determine whether anyone was injured in the wildfire until the flames subside. Firefighters and law enforcement officers went door to door telling people to evacuate but had to pull out to avoid getting boxed in, said Coconino County Sheriff Jim Driscoll.

He said his office got a call about a man who was trapped inside his house, but firefighters couldn't get to him.

"We don't know if he made it out or not," Driscoll said.

Various organizations worked to set up shelters for evacuees and animals, including goats and horses.

The scene was all too familiar for residents who recalled rushing to pack their bags and flee a dozen years ago when a much larger wildfire burned in the same area.

"This time was different, right there in your backyard," said Kathy Vollmer, a resident.

She said she and her husband grabbed their three dogs but left a couple of cats behind as they faced what she described as a "wall of fire."

"We just hope they are going to be OK," she said.

Earlier in the day, the wildfire shut down U.S. 89, the main route between Flagstaff and far northern Arizona, and communities on the Navajo Nation. The high winds grounded aircraft that could drop water and fire retardant on the blaze.

About 200 firefighters were battling the flames, but more are expected as a top-level national management team takes over later this week.

The fire started Sunday afternoon 14 miles northeast of Flagstaff. Investigators don't know yet what caused it and have yet to corral any part of the blaze.

Ali Taranto rushed to Flagstaff from Winslow, where she works at a hospital, on Tuesday to check on a property she owns that was threatened by the wildfire. She also was getting messages to check on a neighbor whom she found didn't have access to oxygen while the power was out and didn't have the strength to manually open her garage door to evacuate.

Taranto said the neighbor was "disoriented and gasping for air" when she reached her. Firefighters in the area helped get the garage door open and the neighbor to the hospital, she said. Taranto was looking for a shelter for the neighbor's two dogs.

By the time Taranto left the area, the highway into Flagstaff was shut down and she had to drive an extra two hours back home. At least two other neighbors didn't evacuate, she said.

"To see flames several yards away from your property line and to hear the propane tanks bursting in the background, it was very surreal," Taranto said. "Ash falling down. It was crazy."

Red flag warnings blanketed much of New Mexico on Wednesday, indicating conditions are ripe for wildfires. Residents in northern New Mexico's Mora and San Miguel counties were warned to be ready to evacuate as wildfires burned there amid dry, warm and windy conditions.

The National Interagency Fire Center reported Wednesday that over 2,300 wildland firefighters and support personnel were assigned to more than a dozen large wildfires in the Southwestern, Southern and Rocky Mountain areas. Scientists say climate change has made the U.S. West much warmer and drier in the past 30 years and will continue to make weather more extreme and wildfires more frequent and destructive.

Elsewhere in Arizona, firefighters battled a wildfire in a sparsely populated area of the Prescott National Forest, about 10 miles south of Prescott.

Cory Carlson, the incident commander with the Prescott National Forest, said late Tuesday afternoon the high winds have been the biggest challenge, sending embers into the air that sparked new spot fires near State Route 261, along with the demand for crews at other fires.

"We do have a lack of resources," he said. "There's a lot of fires in the region."