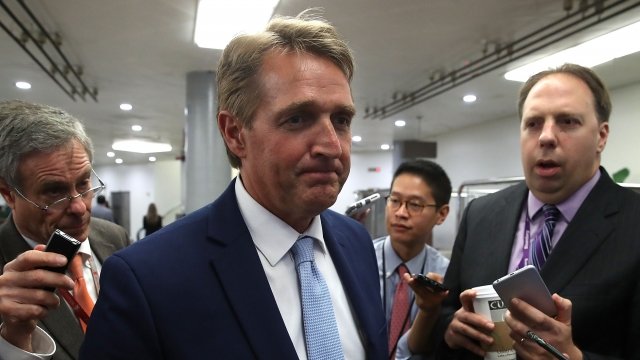 Arizona Sen. Jeff Flake won't be running for re-election in 2018 after all.

As a moderate Republican, Flake would have faced tough contests in the upcoming election from both hopeful Democrats and a potential GOP primary challenge.

Flake cited the current divisive political climate as the reason for his exit, and he seemed to lay the blame for that at the feet of President Donald Trump.

"We must never adjust to the present coarseness of our national dialogue, with the tone set at the top," Flake said.

Trump and Flake have clashed before; the president has attacked Flake for his stance on immigration, while Flake recently published a book condemning Trump's brand of politics. Despite this, Flake has voted with Trump's position in Congress more than 90 percent of the time, according to FiveThirtyEight.

With Flake gone, the GOP will need to find a new favorite to back in 2018. Former GOP state Sen. Kelli Ward had already announced her campaign against Flake and secured the backing of ex-White House adviser Steve Bannon.