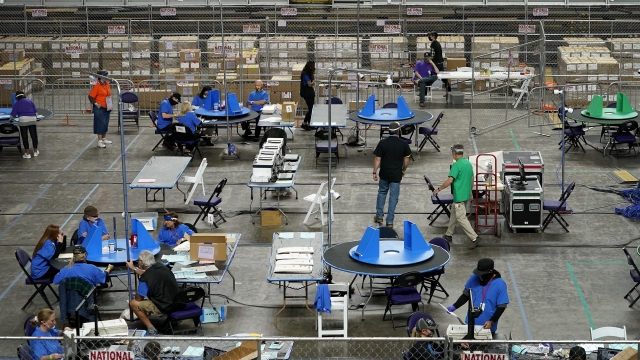 SMS
Arizona Republicans Push Back Against Election Fraud Claims
By Simon Kaufman
By Simon Kaufman
May 18, 2021
Top election officials in Maricopa County are criticizing the state's GOP-controlled Senate for its decision to audit votes from November.
SHOW TRANSCRIPT

In Arizona, state Republicans are pushing back against claims of election fraud from members of their own party.

Top election officials in Maricopa County are criticizing the state's GOP-controlled Senate for its decision to audit votes from November.

"We ran a bipartisan, fair election, that's every piece of evidence that I've ever seen put in front of us. We are operating on facts and evidence presented to this board," Supervisor Clint Hickman said.

Supervisor Steve Chucri said, "The reality is there was doubt cast. So I supported an audit, I supported cooperating with the Senate. What I didn't support is a mockery. And that's what this has become"

"It's time to be done with this craziness and get on with our county's critical business," Chairman Jack Sellers said.

The president of Arizona's state Senate hired an outside firm run by a Trump supporter to audit November's election in Maricopa County. In a recent letter, she questioned how the county handled its ballots. But county officials say they did nothing wrong and the firm running the recount is incompetent.

President Biden won the county and the state. No evidence of widespread voter fraud emerged in the 2020 election.