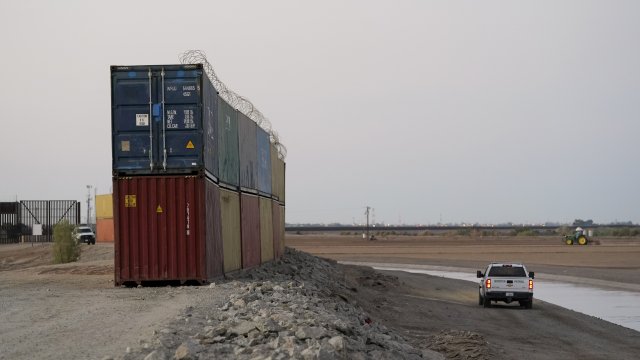 Arizona has rejected the federal government's demand to remove more than 100 double-stacked containers filling gaps along the U.S.-Mexico border.

Arizona has refused the federal government's demand to take down double-stacked shipping containers it placed to fill gaps in the wall along the U.S.-Mexico border, saying it won't do so until the U.S. moves to construct a permanent barrier instead.

The Arizona Department of Emergency and Military Affairs dug in its heels in an Oct. 18 letter to the U.S. Bureau of Reclamation, saying “the containers will remain in place until specific details regarding construction are provided.” It was signed by Allen Clark, the department's director.

A regional spokeswoman for the Bureau of Reclamation did not immediately respond to a request for comment on Arizona’s refusal in the most recent flap between the Biden administration and Republican-led border states over immigration policies.

Election '22: What Matters: Dealing With A Surge Of Migrant Arrivals

Newsy's Axel Turcios explains a recent surge in migrants from South American countries, and what they encounter when they arrive in U.S. cities.

The federal agency told Arizona officials in a letter last week that the containers were unauthorized and violated U.S. law. The bureau also demanded that no new containers be placed, saying it wanted to prevent conflicts with two federal contracts already awarded and two more still pending to fill border wall gaps near the Morelos Dam in the Yuma, Arizona, area.

Arizona Gov. Doug Ducey ordered installation of more than 100 double-stacked containers that were placed over the summer, saying he couldn’t wait for the U.S. Customs and Border Protection to award the contracts it had announced for the work.

Migrants have continued to avoid the recently erected barriers by going around them, including through the Cocopah Indian Reservation. The Cocopah Indian Tribe has complained that Arizona acted against its wishes by placing 42 of the double stacks on its land.

The border wall promoted by former President Donald Trump continues to be a potent issue for Republican politicians hoping to show their support for border security.

President Joe Biden halted wall construction his first day in office, leaving billions of dollars of work unfinished but still under contract. The Biden administration has made a few exceptions for small projects at areas deemed unsafe for people to cross, including the gaps near Yuma.

The Center for Biological Diversity raised a different objection to the shipping containers on Wednesday, filing a notice of intent to sue Ducey’s administration over what the environmental group said are plans to erect more shipping containers along the border. The group said the move will obstruct a critical jaguar and ocelot migration corridor.

Ducey's office said it could not comment because it had not received an official notice from the center.