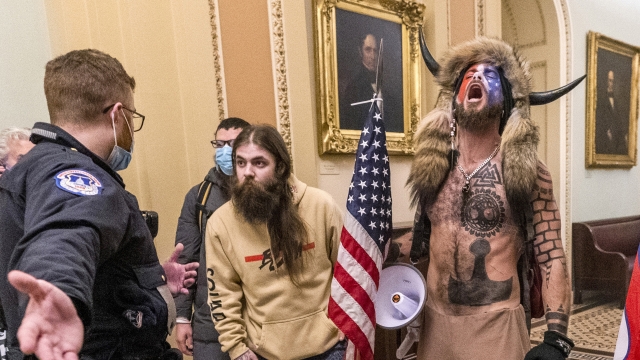 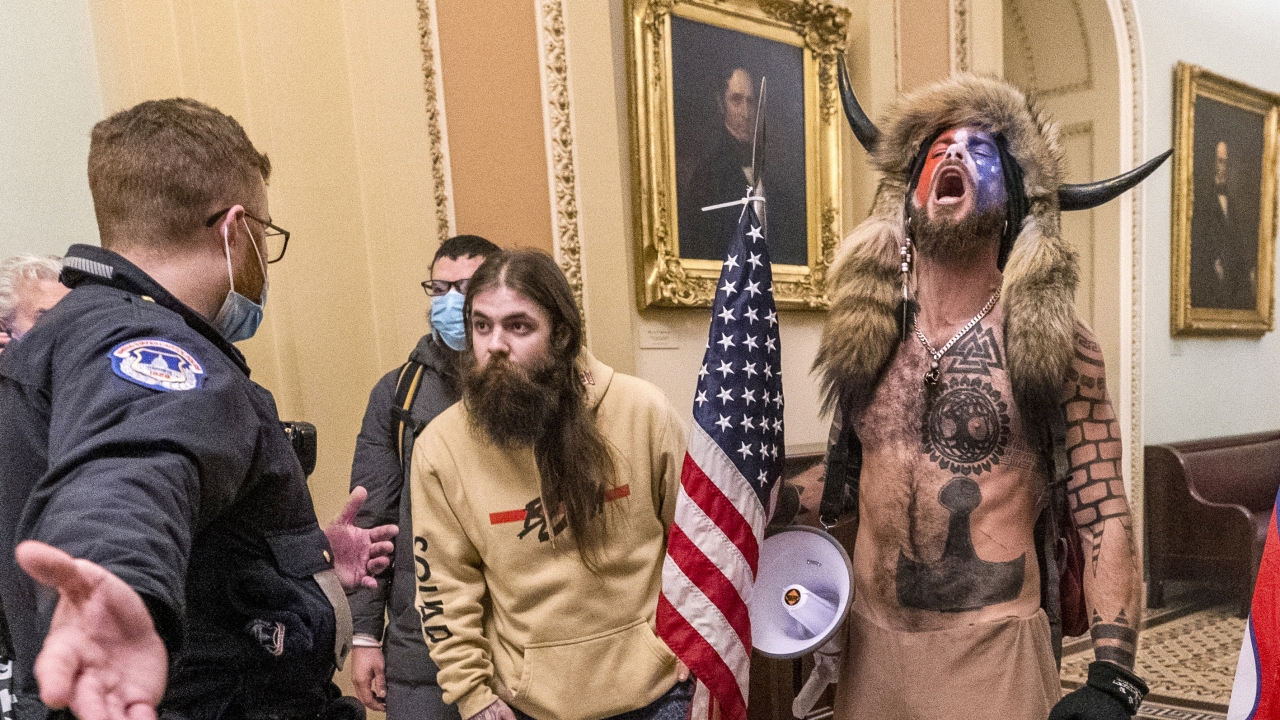 An Arizona man who sported face paint, no shirt and a furry hat with horns when he joined the mob that stormed the U.S. Capitol on Jan. 6 pleaded guilty Friday to a felony charge and wants to be released from jail while he awaits sentencing.

Jacob Chansley, who was widely photographed in the Senate chamber with a flagpole topped with a spear, could face 41 to 51 months in prison under sentencing guidelines, a prosecutor said. The man who called himself "QAnon Shaman" has been jailed for nearly eight months since his arrest.

Before entering the plea, Chansley was found by a judge to be mentally competent after having been transferred to a Colorado facility for a mental health evaluation. His lawyer Albert Watkins said the solitary confinement that Chansley faced for most of his time in jail has had an adverse effect on his mental health and that his time in Colorado helped him regain his sharpness.

"I am very appreciative for the court's willingness to have my mental vulnerabilities examined," Chansley said before pleading guilty to a charge of obstructing an official proceeding.

U.S. District Judge Royce Lamberth is considering Chansley's request to be released from jail while he awaits sentencing, which is set for Nov. 17.

Chansley was among the first wave of pro-Trump rioters to force its way into the Capitol building. He yelled into a bullhorn as officers tried to control the crowd, posed for photos, profanely referred to then-Vice President Mike Pence as a traitor while in the Senate. He wrote a note to Pence saying, "It's only a matter of time, justice is coming." He also made a social media post in November in which he promoted hangings for traitors.

The image of Chansley with his face painted like the American flag, wearing a bear skin head dress and looking as if he were howling was one of the first striking images to emerge from the riot.

Chansley is among roughly 600 people charged in the riot that forced lawmakers into hiding as they were meeting to certify President Joe Biden's Electoral College victory. Fifty others have pleaded guilty, mostly to misdemeanor charges of demonstrating in the Capitol.

Only one defendant who pleaded guilty to a felony charge has received their punishment so far. Paul Hodgkins, a crane operator from Florida who breached the U.S. Senate chamber carrying a Trump campaign flag, was sentenced in July to eight months in prison after pleading guilty to obstructing an official proceeding.

Chansley's lawyer said his client has since repudiated the QAnon movement and asked that there be no more references to his past affiliations with the movement.

The man had long been a fixture at Trump rallies. Two months before the riot, he appeared in costume and carried a QAnon sign at a protest alongside other Trump supporters outside an election office in Phoenix where votes were being counted.

His attorney has said Chansley was previously "horrendously smitten" by Trump and believed like other rioters that Trump called him to the Capitol, but later felt betrayed after Trump's refusal to grant Chansley and others who participated in the insurrection a pardon.

After spending his first month in jail, Chansley said he re-evaluated his life, expressed regret for having stormed the building and apologized for causing fear in others.

Chansley twice quit eating while in jail and lost 20 pounds until authorities gave him organic food.

Watkins has characterized the spear Chansley carried as an ornament, disputed that his client’s note to Pence was threatening and claimed Chansley was in the third wave of rioters into the Capitol.

But the judge said video shows Chansley, who entered the Capitol through a doorway as rioters smashed nearby windows, “quite literally spearheaded” the rush into the building.