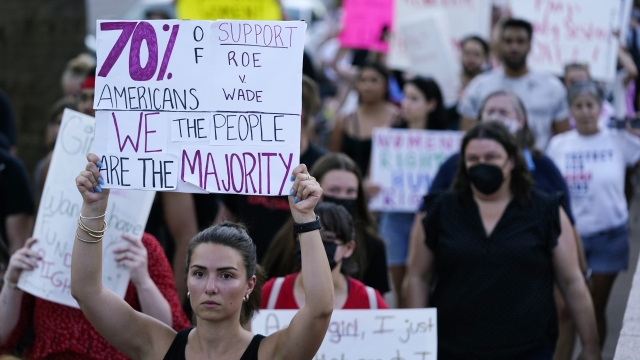 The ruling means the state's abortion clinics will have to shut down and anyone seeking an abortion will have to go out of state.

Arizona can enforce a near-total ban on abortions that has been blocked for nearly 50 years, a judge ruled Friday, meaning clinics statewide will have to stop providing the procedures to avoid the filing of criminal charges against doctors and other medical workers.

The judge lifted a decades-old injunction that blocked enforcement of the law on the books since before Arizona became a state. The only exemption to the ban is if the woman's life is in jeopardy.

The ruling means the state's abortion clinics will have to shut down and anyone seeking an abortion will have to go out of state. The ruling takes effect immediately, although an appeal is possible. Planned Parenthood and two other large providers said they were halting abortions.

Abortion providers have been on a roller coaster since the U.S. Supreme Court in June overturned the landmark 1973 Roe v. Wade decision guaranteeing women a constitutional right to an abortion. At first providers shut down operations, then re-opened, and now have to close again.

Planned Parenthood had urged the judge not to allow enforcement, and its president declared that the ruling "takes Arizonans back to living under an archaic, 150-year-old law."

"This decision is out of step with the will of Arizonans and will cruelly force pregnant people to leave their communities to access abortion," said Alexis McGill Johnson, Planned Parenthood Federation of America's president and CEO, said in a statement.

Republican Attorney General Mark Brnovich, who had urged the judge to lift the injunction so the ban could be enforced, cheered.

"We applaud the court for upholding the will of the Legislature and providing clarity and uniformity on this important issue," Brnovich said in a statement. "I have and will continue to protect the most vulnerable Arizonans."

The ruling comes amid an election season in which Democrats have seized on abortion rights as a potent issue. Sen. Mark Kelly, under a challenge from Republican Blake Masters, said it "will have a devastating impact on the freedom Arizona women have had for decades" to choose an abortion. Democrat Katie Hobbs, who is running for governor, called it the product of a decadeslong attack on reproductive freedom by Republicans that can only be fended off by voters in November.

Masters and Kari Lake, the Republican running against Hobbs, both back abortion restrictions. Their campaigns had no immediate comment.

The near-total abortion ban was enacted decades before Arizona secured statehood in 1912. Prosecutions were halted after the injunction was handed down following the Roe decision. Even so, the Legislature reenacted the law in 1977.

Assistant Attorney General Beau Roysden told Johnson at an Aug. 19 hearing that since Roe has been overruled, the sole reason for the injunction blocking the old law is gone and she should allow it to be enforced. Under that law, anyone convicted of performing a surgical abortion or providing drugs for a medication abortion could face two to five years in prison.

Louisiana Woman Was Denied An Abortion For Fetus Without A Skull

Nancy Davis is pushing back against a Louisiana hospital she claims denied her an abortion after telling her the fetus would not survive.

An attorney for Planned Parenthood and its Arizona affiliate argued that allowing the pre-statehood ban to be enforced would render more recent laws regulating abortion meaningless. Instead, she urged the judge to let licensed doctors perform abortions and let the old ban only apply to unlicensed practitioners.

The judge sided with Brnovich, saying that because the injunction was issued in 1973 only because of the Roe decision, it must be lifted in its entirety.

"The Court finds an attempt to reconcile fifty years of legislative activity procedurally improper in the context of the motion and record before it," Johnson wrote. "While there may be legal questions the parties seek to resolve regarding Arizona statutes on abortion, those questions are not for this Court to decide here."

In overturning Roe on June 24, the high court said states can regulate abortion as they wish.

A physician who runs a clinic providing abortions said she was dismayed but not surprised by the decision.

"It kind of goes with what I've been saying for a while now –- it is the intent of the people who run this state that abortion be illegal here," Dr. DeShawn Taylor said. "Of course we want to hold onto hope in the back of our minds, but in the front of my mind I have been preparing the entire time for the total ban."

Republicans control the Legislature, and GOP Gov. Doug Ducey is an abortion opponent who has signed every abortion law that reached his desk for the past eight years.

Johnson, the judge, said Planned Parenthood was free to file a new challenge. But with Arizona's tough abortion laws and all seven Supreme Court justices appointed by Republicans, the chances of success appear slim.

What's allowed in each state has shifted as legislatures and courts have acted since Roe was overturned. Before Friday's ruling, bans on abortion at any point in pregnancy were in place in 12 Republican-led states.

In another state, Wisconsin, clinics have stopped providing abortions amid litigation over whether an 1849 ban is in effect. Georgia bans abortions once fetal cardiac activity can be detected. Florida and Utah have bans that kick in after 15 and 18 weeks gestation, respectively.

The ruling came a day before a new Arizona law banning abortions after 15 weeks of pregnancy takes effect. Signed by Ducey in March, the law was enacted in hopes that the Supreme Court would pare back limits on abortion regulations. Instead, it overturned Roe.

Ducey has argued that the new law he signed takes precedence over the pre-statehood law, but he did not send his attorneys to argue that before Johnson.

The old law was first enacted among a set of laws known as the "Howell Code" adopted by 1st Arizona Territorial Legislature in 1864. Arizona clinics have been performing about 13,000 abortions a year.