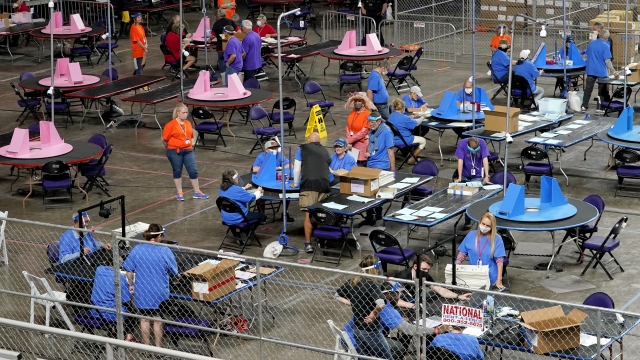 SMS
Arizona Election Audit Causes Republican Rift
By Nathaniel Reed
By Nathaniel Reed
August 27, 2021
Skepticism plagues many Arizona voters and some have already made up their minds, regardless of whatever the audit report says.
SHOW TRANSCRIPT

Imminent release of a partisan audit into the 2020 election results in Arizona – authorized in March by the GOP state Senate – has pitted elected Republicans against each other.

Stephen Richter was elected in 2020 to help oversee elections in Maricopa County – the state's largest.

"They started to pursue this in what I believe to be an unprofessional manner that will only erode confidence in our elections," Richter said.

He flipped the county recorder's office red in a down ballot race last November – the same year Donald Trump lost. He initially supported an election audit.

"I'd have to be a doofus not to understand that there's a significant percentage of the party that doesn't have confidence in how the 2020 elections were administered," he said.

But it was the state Senate's selection of Cyber Ninjas to conduct the audit – a Florida-based company with no experience leading election probes and whose CEO has spouted debunked election conspiracy theories – that has caused many prominent Arizona Republicans to distance themselves.

One of the theories already floated by associates of Cyber Ninjas is the assertion that tens of thousands of ballots were cast fraudulently for Joe Biden last November – something Richter characterized as "laughable" in a 38-page open letter he sent last week to Arizona Republicans.

Newsy repeatedly reached out to representatives of Arizona's Republican State Senate and was denied interviews with all 16 state Senators.

Contacted directly, Newsy found one Republican state senator who originally supported the audit has turned on an email auto-reply with a letter explaining why he abandoned support for the probe, saying in part: "What's been going on these past few months cannot be called a professional audit."

On the national scale, former President Donald Trump said "the facts are coming out, the truth is being uncovered and the crime of the century is being fully exposed."

But so far, the audit – pitched as a way to restore voter confidence – has fallen short.

"I want myself, my children, my friends and my family to know that when they participate in an election in Arizona, the results are going to be tabulated accurately,"he said. "Even when the results are close, they can have confidence that they can believe those results."

The audit is still turning heads in other states across the country, especially from far-right voters disaffected with President Biden's win in the 2020 election.

Arizona voter Scott Ziegler said many are still eager for the results of the audit.

"I know people that are in other states that are waiting for this," he said. "This is a big deal."