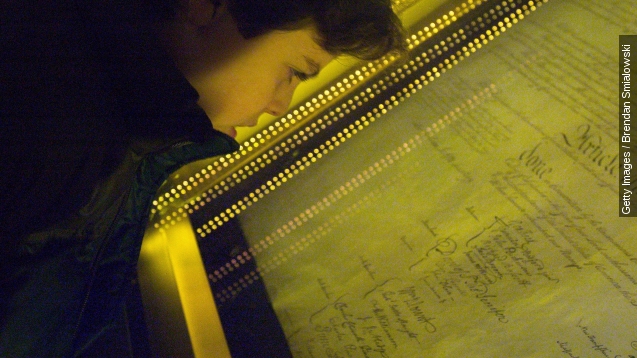 By Sebastian Martinez
August 20, 2015
As debates over the Constitution reignite, let's take a look at the history of the document because sometimes, it's a matter of interpretation.
SHOW TRANSCRIPT

"They do not have American citizenship; we have to start a process where we take back our country," Donald Trump told Fox News.

Donald Trump's suggestion to get rid of birthright citizenship has brought the U.S. Constitution to the forefront of the presidential campaign.

But the Constitution — and the respect for it — is often bandied about by politicians, who disregard that its interpretation is up for debate and has been, basically as long as it's been around. (Video via C-SPAN, NBC, Fox News)

One of the biggest debates in our country's history was over that very issue more than 200 years ago, pitting Federalists against Democratic-Republicans. (Video via HBO / "John Adams")

Basically the Federalists, under Alexander Hamilton, supported a larger central government and subsequently a broader interpretation of the Constitution, bringing in the idea of implied powers among others. (Video via Architect of the Capitol, Bio)

The Democratic-Republicans, led by Thomas Jefferson, favored a smaller government and, therefore, were more strict in their interpretation.

A lot of the GOP candidates fall on the latter side. But in their arguments, they often treat the Constitution like a stone tablet, not a living document that's been amended and interpreted since its creation.

The Federalists who supported a looser interpretation also played a part in creating the document in the first place. Hamilton was a part of the Constitutional Convention, which drafted it, and the Federalist Papers he largely wrote have been a guide for interpretation ever since. (Video via History Channel)

In fact, the current attack by some GOP candidates on birthright citizenship is, in its own way, a modern manifestation of that original debate about interpretation. (Video via MSNBC)

The candidates, like Trump, who argue the 14th Amendment is being exploited by undocumented immigrants, have their perspective. And their opponents, even within the GOP field, argue: "That's a Constitutional right," Jeb Bush told CBS.

This video includes images from Getty Images and U.S. National Archives and music from "Merlot" by Birocratic / CC BY ND 3.0.