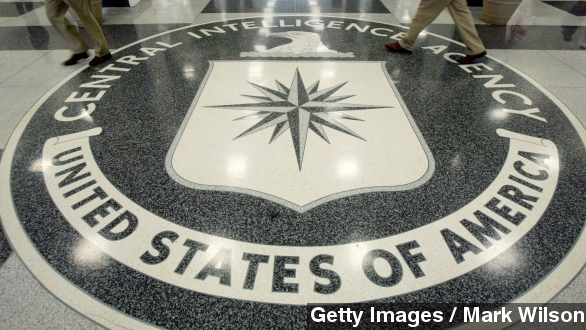 SMS
'Argo' Tweets And Bin Laden Dolls: The CIA's Weird Week
By Matt Picht
By Matt Picht
November 8, 2014
The CIA marked the anniversary of the Iran hostage crisis by fact-checking "Argo" on Twitter, and a CIA bin Laden doll is up for auction.
SHOW TRANSCRIPT

It's been kind of a strange week for the Central Intelligence Agency.

For one thing, the agency marked the 35-year anniversary of the first day of the Iranian hostage crisis on Tuesday. (Video via ABC)

The agency commemorated the anniversary on its official site with a brief retelling of the event from some former agents who were taken captive.

The CIA Twitter account focused on Ben Affleck's 2012 film "Argo," which details the successful CIA operation to evacuate six Americans trapped in Iran during the crisis by posing as a film crew.

And while the agency gave the film a glowing review, they took the liberty of pointing out a few factual errors. The agency also tweeted some neat historical tidbits, like some of the fake documents used in the operation, and the fact that the mission was approved with the line, "See you later, exfiltrator."

Speaking of creativity: remember those demonic Osama bin Laden dolls the CIA almost made? Apparently, at least one is now up for auction.

But as we said, the CIA was pretty happy about Affleck's film overall, praising it for reflecting the "innovative, brave, & creative" people who were part of the operation.

The Washington Post reported back in June that in 2005, the CIA had hired G.I. Joe creator Don Levine to produce a bin Laden figure to distribute to Pakistani children and give the Al-Qaeda leader a negative image.

The project was scrapped early in development, and the Post could only confirm the existence of three action figures. Two of them are in possession of the CIA and the Pentagon, and the third ... is up for grabs.

Auction site Nate D. Sanders posted this lot Thursday, with bidding starting at $2,500. The site claims this doll is from Levine's estate. Levine passed away this May at the age of 86.

If you're in the market for some really bizarre War on Terror memorabilia, you've got until Nov. 20 to bid on the doll. So far, the CIA hasn't commented on the auction.