Argentina's President To Put Forward Bill That Would Legalize Abortion 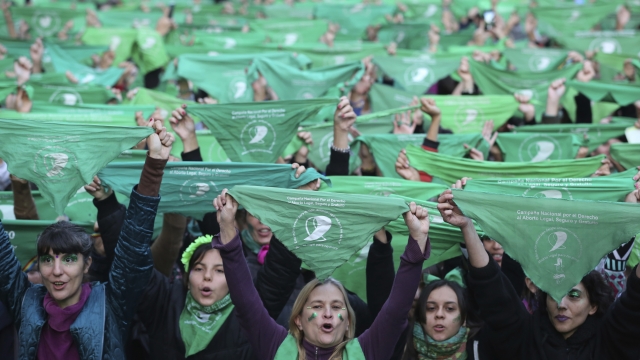 For years, a sea of protesters holding green handkerchiefs has been a symbol of the pro-abortion movement in Latin America. And this year, Argentine activists could get their wish.

In his first annual address to Congress, Argentine President Alberto Fernández said Sunday that he will send a bill to Congress before the end of next week that would legalize abortion. He's the first Argentine president to stand behind such legislation.

He said: "A state should protect citizens in general and women in particular. And in the 21st Century, every society needs to respect the individual choice of its members to decide freely about their bodies."

Right now, a woman in Argentina can only legally have an abortion if she was raped or if the pregnancy would threaten her own life. Otherwise, seeking one is punishable by jail time.

Fernández said criminalizing abortion "has also condemned many women, generally of limited resources, to resort to abortive practices in absolute secrecy, putting their health and sometimes their lives at risk."

According to Al Jazeera, Argentina's government estimates 350,000 women have illegal abortions every year. Some human rights groups say the actual number could be closer to half a million.

Argentina could become the largest Latin American country to allow abortion and one of just a handful to do so. It's currently legal in Cuba, Uruguay and Guyana. But countries including Nicaragua, Honduras, Haiti, El Salvador and The Dominican Republic do not allow abortion under any circumstances.