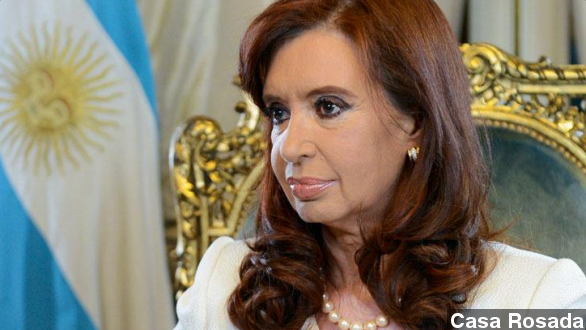 SMS
Argentina's President Charged In Bomb Cover-Up
By Kate Grumke
By Kate Grumke
February 13, 2015
An Argentinian prosecutor will move forward with charges against Argentina's president over an alleged cover-up in a terror attack.
SHOW TRANSCRIPT

Argentina's President Cristina Fernandez de Kirchner has been charged with trying to cover up Iran's alleged involvement in the 1994 bombing of a Jewish community center.

Nisman accused Fernandez and others in her administration of covering up Iranian officials' involvement in a 1994 bombing that killed 85. He said the proposed cover-up was in exchange for trade deals between the two countries.

On Jan. 18, four days after Nisman accused the president, he was found dead in his Buenos Aires apartment.

This is the biggest political scandal of Fernandez's presidency; outraged Argentinians have taken to the streets to call for justice.

"This is a bit of a relief for Argentines who live in a place where accountability isn't necessarily given," Bloomberg contributor Katia Porzecanski said.

President Fernandez's administration calls the charges an attempt at a coup. Fernandez blames Nisman's accusations and death on rogue intelligence officials trying to damage her reputation.

Now a federal judge will have to decide if there is enough evidence to move forward with the case against Fernandez.