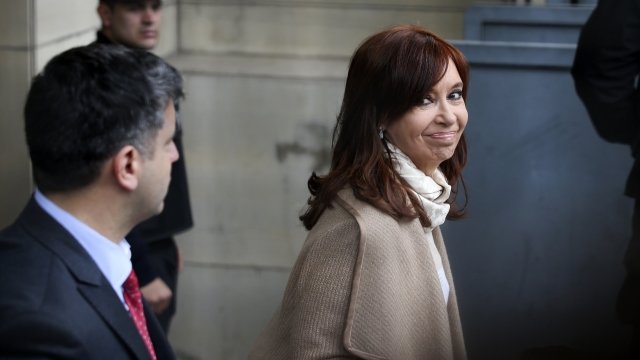 By Katie Cammarata
September 18, 2018
In the indictment, a federal judge asked that Cristina Fernández de Kirchner be taken into custody and some of her assets seized.
SHOW TRANSCRIPT

Argentina's former president has been indicted — yet again.

Cristina Fernández de Kirchner — who served two terms as president from 2007 to 2015 — was indicted on Monday. The charges accuse her of leading a corruption scheme during her administration that accepted bribes from construction companies in return for work contracts.

She is also accused of running the scheme during part of her late husband's administration, when he served as Argentina's president between 1991 and 2003. Kirchner has previously denied all wrongdoing.

In the indictment, a federal judge asked that law enforcement take Kirchner into custody and seize about $100 million of her assets.

But since Kirchner is currently a senator, she has immunity from arrest in Argentina, though she can still be prosecuted. The Washington Post reports the only way that immunity can be lifted is by a two-thirds majority senate vote.

In 2016, Kirchner was indicted for a number of other corruption charges.

Multiple outlets report that although Kirchner has been indicted, she's still pretty popular in Argentina, and is even expected to run for president again next year.