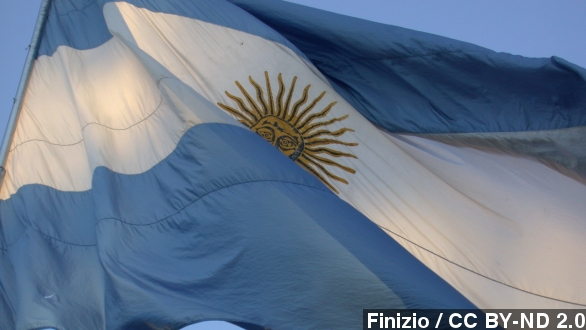 By Sebastian Martinez
July 31, 2014
Argentina defaults on its debt for the second time in 13 years — what that means for the second biggest country in South America, and the world.
SHOW TRANSCRIPT

When Argentina defaulted on its debt, it was the largest country ever to do so— now it's done it again. (Via Finizio / CC BY-ND 2.0)

For the second time in 13 years Argentina has taken the nuclear option and defaulted, after talks with a group of so-called "Vulture fund" investors failed. (Via BBC, Financial Times, USA Today)

They've been branded "Vulture" investors in Argentina, because they bought up some of the country's bad credit — left after the last default — then sued the country when it couldn't repay them in full. (Via Press TV)

As The Guardian explains, in this case, "the creditors holding out for full repayment are New York hedge funds ... They make up a small proportion of the country's creditors."

Basically, as CNBC reports, the country was due to pay its creditors an agreed-upon $539 million in interest on Wednesday, but the hedge funds in question —the so-called "Vultures"— demanded the full $1.3 billion.

Most outlets report the hedge funds make up less than a tenth of the country's creditors, but thanks to a Supreme Court ruling in June that gives them priority in Argentina's repayment schedule, that doesn't matter. (Via The Wall Street Journal)

The memory of the country's last default in 2001 is still a fresh and a painful one, and it's unclear how the country will react this time around.

The last time Argentina defaulted the country saw mass rioting that even turned fatal, because the country's currency collapsed, and people essentially saw their money lose most of its value overnight. (Via Telefe Noticias)

And something of an "us versus them" mentality developed among many Argentines as well. "Them" first referred to the International Monetary Fund, which many Argentines blamed for driving the first default, but now the "Vulture" investors draw citizens' wrath. (Via Democracy Now, The New York Times)

"People feel unfairly treated by the international financial community and they're giving out posters saying, 'Argentina or the Vultures: the country won't negotiate.'" (Via BBC)

There still haven't been any riots reported after the default, but the question still looms: where does this leave Argentina?

Well, as a writer for Businessweek points out: everybody loses. The "Vulture" investors don't get their money, "And Argentinians, well, they’re already in bad place, struggling with recession and 40 percent inflation and running out of money fast. Things don’t exactly change for them, but they don’t get better."

And as Argentine newspaper La Nación noted, there's a lot of uncertainty in the country, but not for Standard & Poors, which Wednesday officially declared the country in selective default.