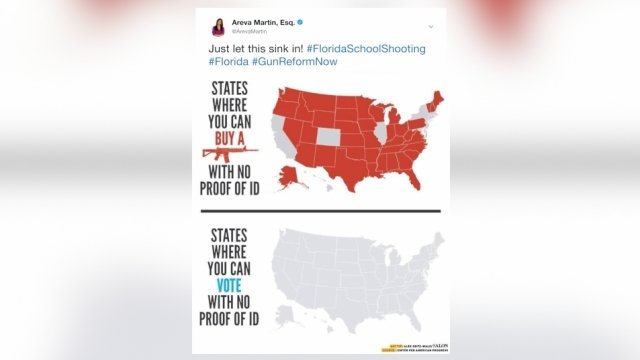 SMS
Fact Check: This Graphic On Guns Isn't Really Accurate
By James Packard
By James Packard
March 1, 2018
This graphic suggests you need a photo ID to vote in every state. That's not true.
SHOW TRANSCRIPT

In the wake of the Stoneman Douglas High School shooting, you might have seen this graphic floating around online. One of the people who prominently tweeted it was commentator Areva Martin.

But the graphic doesn't tell the whole picture, and it misrepresents the facts. Big time. 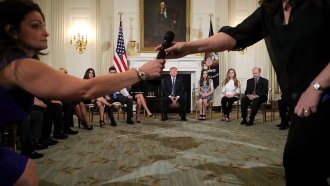 Students Debate Guns And School Safety At The White House

First of all, let's tackle IDs for voting. You don't need a photo ID to vote in every state. Some states have stricter laws that require that, but in 16 states, you don't need to show ID at polling stations at all.

Second, the issue of purchasing guns. It's true that in states without stricter laws people can buy a gun from an unlicensed private seller without showing an ID or completing a background check. But a vast majority of guns are purchased at a store, and if a buyer is getting a gun from a licensed federal seller they have to complete a background check, which includes showing proof of ID.

So the graphic has a point on the IDs for guns. But it doesn't tell the whole story, and it's certainly not right about having to show ID to vote in every state.