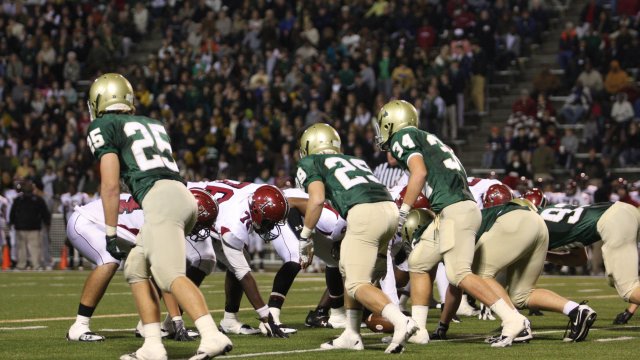 What gets pride of place in high school lobbies?

The heavy sports emphasis — some say "obsession" — caught the attention of Andreas Schleicher, who was born in Germany and visited the U.S. as a teen.

He's now the education director for the Organiation for Economic Coordination and Development and recalls, "Sometimes I asked myself how the children who were good at math would feel their interests were valued."

Lots of foreign students have the same reaction.

A New Jersey high school student (originally from South Korea) summed it up this way for The Atlantic: "Sports are a big deal here."

Here's why she says that: Most high schools in Asia and Europe don’t have sports. Kids who want to play sports join club teams. Schools tend to be all about learning.

This means you don't have a football coach — or any kind of coach —  doubling as a teacher.

In some foreign countries like Singapore, there's a high bar for becoming a teacher. Less than one-fifth of applicants make it. And the teacher turnover rate is low — below 3 percent. The U.S.' rate is more than double that. In some countries, it’s harder to get into teaching programs than medical or law school.

Foreign high schools have PE, but it tends not to be focused on competition.

In Spain, kids learn to dance. In Lithuania and Hungary, PE includes posture and breathing exercises.

That could be why the 2017 Brown Center Report on American Education found a little over 64 percent of foreign exchange students said U.S. kids value success in sports "much more" than teens in their home country.

Only 5 percent said U.S. students valued success in math more than students in their home countries.

What difference does it make?

The United States ranks 31st on the most recent Program for International Students Assessment, a test that measure the world's education achievement. Singapore, by comparison, ranks No. 1.

South Korea ranks 9th. Researchers found "American students spend double the amount of time playing sports as their Korean counterparts (approximately 100 minutes vs. 40 minutes)." A curveball here: In the U.S., sports correlated with higher achievement, but the opposite is true in Korea.

Obviously, it's debatable how much U.S. performance on PISA is linked to sports. Other cultural, educational and economic factors could play a role.

Regardless, it's unlikely many U.S. high schools will give the trigonometry trophy more prominence than the state champs. Those Friday night lights shine bright.