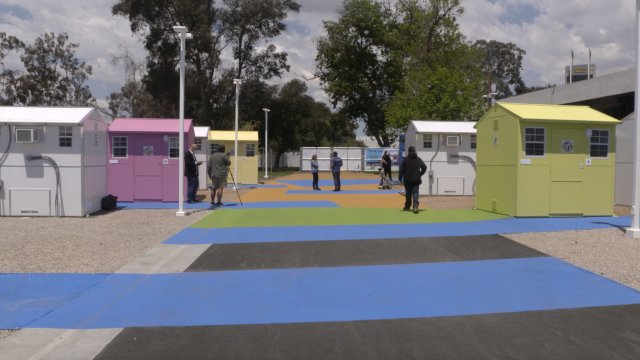 SMS
Are Tiny Homes The Answer To Our Homeless Crisis?
By Newsy Staff
By Newsy Staff
April 28, 2021
Tiny homes, big ambition: To make a dent in homeless numbers in Los Angeles.
SHOW TRANSCRIPT

"Society looks down on us, it's very painful, they ostracize us."

Life's been really tough for Michelle.

Evicted, living in her truck, and...

"I was attacked, being out here, I was sexually assaulted."

Becoming one of LA's street-statistics. No home, no hope.

"I was a normal middle class citizen and then I became disabled. And no matter how hard you try to work, you're still disabled. People don't want your limitations and don't want your excuses. They want you to work."

But that all changes today. Michelle's got a brand new place, and she absolutely loves it.

It’s tiny, even by LA standards, just 64 square feet. But it's home, and to her, it's perfect.

"You've got the air conditioner, the heater, the power outlet and everybody gets a little gifty."

There'll be a few neighbors soon too. Up to 200 in this new, colorful complex. Paid for by the city, run by a charity. Brand new, fully equipped...

"You have the dog park, 15 showers, our washers and dryers and up here, WiFi for all of our guests."

"Having a lockable door has that extra security to go inside and lock the door and make them feel that they're in control."

See, for years, this has been a massive homeless camp. Dozens of people living on this wasteground next to a busy freeway in Los Angeles. It's only empty now because authorities cleared it a few weeks back. The idea here — invite those people in, behind these walls. Give them a roof, their own four walls and a real chance to get off the streets, and stay off the streets.

“It's not permanent. It’s more like a motel. You're here for a moment while we work to get you permanent supported housing."

L.A. has a massive homeless problem by any stretch. Last year, 66,436 on the streets in L.A. County and 41,290 in the city. The count this year was delayed due to COVID, but the pandemic is expected to have led to a huge surge. In fact, forecasts expect the numbers to skyrocket by 86% over the next four years.

Which is why a judge has now ordered the city to house every single homeless person on Skid Row — the infamous street in Downtown L.A. where thousands sleep on the sidewalk. That's got to be done by October, and officials have to find a billion dollars to pay for it within the next sixty days.

"I have hope now, God has worked. I said, 'Come on, God, we've been doing this dance for years, can I please see some of the good? Give me back my hope at least.' And he did... He did."