Are NBA Sleeved Jerseys About To Get Cut? LeBron Hopes So 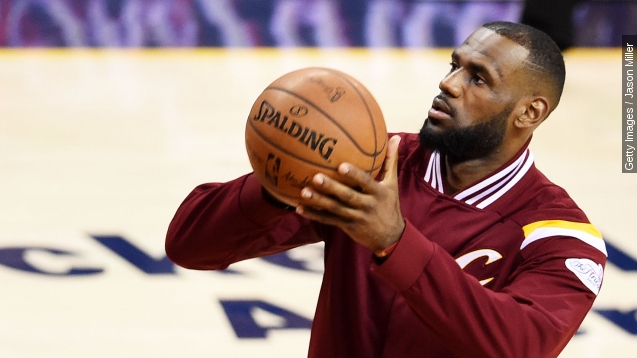 SMS
Are NBA Sleeved Jerseys About To Get Cut? LeBron Hopes So
By Carter Woodiel
By Carter Woodiel
November 5, 2015
The Cleveland Cavaliers wore their first black-sleeved uniforms Wednesday night. When LeBron James' shots weren't falling, he tore the sleeves off.
SHOW TRANSCRIPT

If you follow the NBA, you know sleeved uniforms are all the rage these days. But the best player in the game isn't a fan of the relatively new trend.

During Wednesday night's game against the Knicks, four-time MVP LeBron James was struggling with his shot and tore the sleeves off his uniform. (Video via Beats Electronics)

This probably didn't go over too well with the Cavs' ownership, who unveiled the new black threads, along with two other unis, as part of the team's 45th anniversary this year.

NBA teams started rolling out sleeved unis a couple of years ago, partially because of their marketing potential, since they'd be easier for fans to wear — especially those who don't want to show off their physique in a sleeveless tank.

But the sleeves don't seem to sit well with players. James has been critical of the uniforms, saying the sleeve clings to his arm and distracts him while he's shooting.

He’s joined by NBA stars like Dirk Nowitzki who's called sleeved uniforms "awful"; reigning MVP Stephen Curry, who said they were "ugly"; and Robin Lopez, who said they should be burned.

This means players' annoyance with sleeves might be more mental than anything, something James acknowledged following Wednesday's game.

"I don't know? It might be mental; it's okay," James told reporters. "The jerseys look nice, we love the jerseys. The black looks great. I was a little frustrated with my shot, couldn't make a bucket. So like I said, I had to take it out on something."

The good news for LeBron — and fans who don't dig sleeved jerseys — is they may be on the way out. (Video via Nike)

Adidas, the NBA's uniform manufacturer, won't renew its contract with the league, which ends in 2017. If either Nike or Under Armour picks up the contract, it might mean the end of Adidas' sports fashion statement. (Video via NBA)

Though who's to say the company doesn't have another trick up its ... nevermind.