Are Millennials In The US Less Religious? 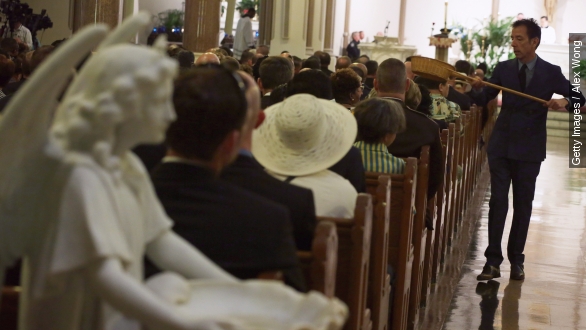 The number of Americans identifying themselves as Christian is declining, while other religious affiliations are slightly increasing, according to a recent survey.

The Pew Research Center looked at more than 35,000 Americans over the age of 18. More than 70 percent affiliated themselves with Christianity, a nearly 8 percent drop from 2007.

Still, that's nearly three-fourths of the population, so it remains the largest religion in the U.S.

One of the reasons attributed to this Christianity decline is due to the number of people describing themselves as Catholic and mainline Protestant both decreased from 2007 to 2014.

While the majority of religious branches falling under Christianity decreased, the number of people describing themselves as Jehovah's Witnesses increased just slightly, from 0.7 percent to 0.8 percent.

These findings fall right in line with the American Religious Identification Survey from 2009, which found the number of American adults identifying themselves as Christian fell from 86 percent in 1990 to 76 percent in 2008.

Other non-Christian religions like Islam, Judahism and Hinduism all had slight increases over those seven years, as well. But the most striking change was seen in the increase in those not affiliating themselves with any religion.

The Pew Research Center found 56 million U.S. adults were atheist, agnostic, or didn't consider themselves anything in particular in 2014, up from 19 million in 2007.

The U.S. population has grown over the years studied by the Pew Research Center.

Besides a population boost, the jump in the unaffiliated numbers was helped by a generational change, with the largest portion, 36 percent, being younger millennials born between 1990 and 1996.

Only 11 percent of those from the silent generation, those born between 1928 and 1945, described themselves as unaffiliated, while 85 percent said they were Christian.

To sum it up, millennials just aren't that religious.