Are Images From Gaza Turning Public Opinion Against Israel? 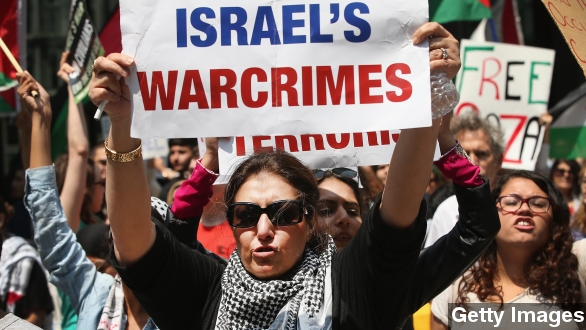 SMS
Are Images From Gaza Turning Public Opinion Against Israel?

By Steven Sparkman
July 29, 2014
More Western journalists are reporting from Gaza, meaning audiences are seeing more footage of civilian casualties than ever before.
SHOW TRANSCRIPT

The current Israeli operation in Gaza is going into its fourth week, and Benjamin Netanyahu says it might not be ending anytime soon. (Via Getty Images)

The Israeli prime minister said the operation would not be finished until the tunnels between Israel and Gaza, which Hamas fighters use to attack Israeli civilians, are destroyed. (Via YouTube / IsraeliPM)

But can the Israeli government stand a long conflict, or, as many pundits question, is the country in danger of losing a battle for public opinion on the world stage?

Several outlets claim the Palestinian death toll, combined with the rapid spread of images and victims' stories from Gaza, are turning the tide against Israel. (Via PR Week, Haaretz, Mashable)

According to the progressive Israeli paper Haaretz, Israel’s Ambassador to the U.S. Ron Dermer told a conference call of American-Jewish leaders, "Israel is being routinely portrayed in both conventional and social media as an angry, well-armed giant leaving many innocent victims in its wake."

Part of the reason is that there are simply more Western journalists in Gaza this time around than in previous operations. That gives media coverage more of the other side's perspective than Western audiences are used to.

The clearest example of this came when an Israeli military strike killed four young boys playing on a beach. The strike occurred right next to a hotel where many Western journalists were staying, resulting in a flood of images and video of the horrific scene. That kind of tragedy might not have been so easily filmed and broadcast in previous years. (Via BBC, The New York Times)

It's no surprise, then, that a steady stream of protests against Israel's operation have broken out all over the world. (Via Sky News)

But does this represent a real shift in support? A Pew poll released this week shows that, among Americans, twice as many blame Hamas for the latest conflict than blame Israel, and around half of Americans think Israel's military operation is an appropriate response.

Given that the U.S. gives around $3 billion annually in aid to Israel, that's an important finding, even if younger Americans were less likely to support the country. But that level of support is also an anomaly.

Unfavorable views of Israel are the majority in Germany, France, China and all Arab and Muslim countries. (Via Pew Research Center)

Part of that might have to do with the overwhelming unpopularity of Israel's total blockade of Gaza and strict control of the West Bank. U.S. Secretary of State John Kerry drew Israeli ire earlier this year for saying Israel could become an apartheid state. Former president Jimmy Carter has frequently said it already is. (Via Getty Images, Getty Images, Getty Images)

Even in Israel, where support for the last two wars in Gaza has topped 90 percent, a 2010 poll found a quarter of Israelis felt the blockade did more harm than good. (Via Jewish Virtual Library)

Netanyahu has defended the blockade, though, especially after a ship carrying advanced weapons was intercepted on the way to Gaza earlier this year. (Via Israel Defense Forces)

And for now, it doesn't look like public opinion is going to sway the prime minister. He said Sunday that Israel would not cede national security for the sake of public relations.