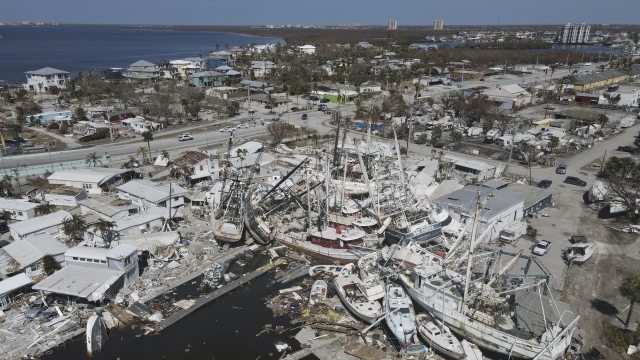 In September hurricane Ian made landfall in southwestern Florida. The deadly storm killed more than 100 people and caused tens of billions of dollars in damage.

So what fueled all this destruction? Are hurricanes getting stronger? And is there a link to a warming planet?

Ian began as a tropical depression in the Caribbean. It then pummeled Cuba as a category three storm. Then it moved over waters in the Gulf of Mexico, which were two to three degrees warmer than usual, in September. That gave the storm a boost.

The hurricane's swirling winds sucked up the heat energy. It intensified to 155 miles per hour, a category four storm at landfall and one of the strongest storms to ever hit the U.S.

While scientists can't pin any one storm on a warming planet, the behavior of the hurricane was consistent with how scientists predict a hotter ocean might supercharge future storms.

So is climate change making hurricanes stronger?  Maybe – but the evidence isn't conclusive yet. The tropical Atlantic Ocean has warmed by one to two degrees Fahrenheit compared to recent decades.

But despite that increase in ocean water temperature, scientists don't think the annual number of major hurricanes in the Atlantic has risen since 1850.

"We don't really see very strong evidence at this time for some type of long term linear change, such as something that would be driven by increasing greenhouse gases," said Tom Knutson, a climate modeler at the U.S. Geophysical Fluid Dynamics Laboratory, a division of the National Oceanic and Atmospheric Administration.

The climate footprint might be there, but it could be drowned out by other fluctuations, said Knutson.

Atlantic hurricanes seemed to diminish from the 1950s to the 1980s, but scientists aren't sure why.

Some think that globally, tropical cyclones have already become rainier. One study suggested that since 1998, the storms have dumped 1% more rain each year.

All that rain can cause deadly flooding, adding to other risks like winds or storm surges, but what about the future? Knutson uses computer models to simulate how a hotter, wetter atmosphere might affect hurricane trends.

For every degree Fahrenheit of warmer global temperatures, the NOAA computer model predicts hurricane windspeeds to increase by 1%. That may not sound like much, but it would raise potential damage by 3%.

And with every inch of sea level rise, NOAA says the storm surge from any given storm will be greater, and the water will tend to move further inland.

Together, they make the forecast for the coming decades stormy indeed.