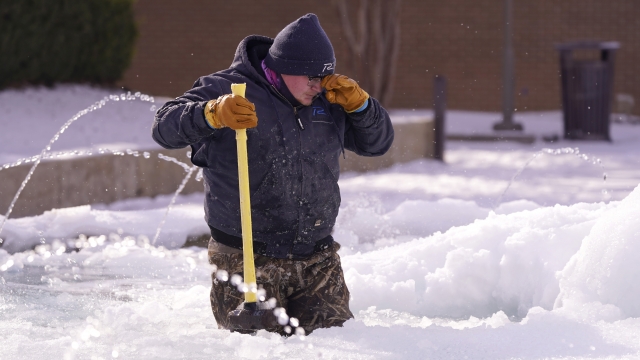 “I have never, in my 27 years that I have grown up in Texas, ever experienced something like this. This is completely new to me. It's a little bit nerve-wracking,” Areli Gonzalez said.

No power and no heat. That’s what millions of Texans are facing as a historic winter storm grips the state.

And now there are concerns hotels are jacking up prices as people look to escape the cold.

“We got the room at the price it was supposed to be booked at. But I did hear about [price gouging]. And it honestly made me completely upset at the fact that there are health care workers that need to get to work safely to be able to take care of people, and if they're price gouging, that's completely unfair,” Gonzalez said.

Although she says her stay at the Marriott was a good experience, Gonzales admits she is among the very lucky few after she and a few of her coworkers rented a room just days before the storm hit.

“When we got there, it was a little bit chaotic. We saw a lot of people just kind of, like, scrambling to check in. We found out that some of -- a lot of the rooms got booked up. So they were actually turning a couple of people away," Gonzalez told Newsy.

But other hotels like Wyndham Hotels and Resorts are under intense scrutiny after questions were raised about potential price gouging.

A spokesperson for the Austin hotel said they do not tolerate price gouging. They say they believe the rate increase was an employee error.

Around the state: store closures, low supply of firewood and slippery roads.

“The grocery stores are completely, a lot of people went to the grocery store to take everything. We're kind of going off of some canned goods around here. The commute to work has been nearly impossible," Gonzalez added.

San Antonio spokesman Laura Mayes tells Newsy the city has opened a warming center to  help those still struggling without heat or electricity.  And as far as hotels attempting to price gouge, the Texas attorney general says they will be prosecuted to the fullest extent of the law.