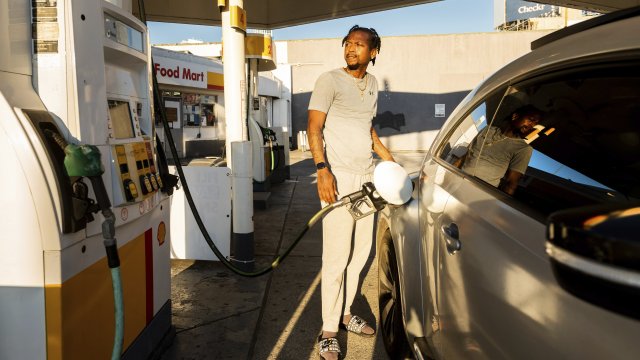 The Biden administration asked OPEC to ramp up production to help lower prices, but it said no.

Gas prices are breaking the bank in the U.S. and next door in Canada, with the country putting gas restrictions in place and prompting panicked stockpiling.

The questions many have are: Why are gas prices so high, what would help them come down, and when will that happen?

Brian Marks is an economics and business professor at the University of New Haven in Connecticut.

"We're going to see some continued price increases, quite frankly, very likely through the holiday season and in the beginning of or through Q1," Marks said. "The winter months, February, are the harshest months for especially the northern tier of the United States."

In simplest terms, demand for gasoline is on the rise as people are moving around again after months spent largely in one place as the coronavirus spread. During that time, big crude oil producers slowed their output, but even after demand came back, they haven't caught up.

"We have a classic supply/demand dynamic going on here," Marks said. "A little over a year ago, WTI was $35 a barrel. Today, we're talking $80 a barrel."

But supply isn't exactly short. The Interior Department says more than half of the land leased to the oil and gas industry is non-producing.

"Why are we not producing out of those oil fields?" Marks said. "One could argue there's a level of artificial scarcity in the fact that there is oil that could be developed and produced."

The Biden administration had asked OPEC — the big oil cartel that dominates the global oil market — to ramp up production and help prices, but it declined. Now, the Biden administration, in concert with China, India, Japan and South Korea, is releasing oil from national stockpiles — a move that could prompt OPEC to cut production.

"It could be a game of brinksmanship going on between the Biden administration and OPEC," Marks said.

The move could finally bring prices down, but it won't be immediate or stay that way forever.

"A coordinated effort to release from a petroleum reserve could help, but not without absolute certainty," Marks said. "It may simply be kicking the can a little bit further down the road."

In the meantime, states are running out of patience to see relief.

Florida's governor asked the legislature to approve a cut to the state's portion of the gas tax, which prompted concerns the savings would go to the gas company instead of the driver.

Some worry this problem will be apparent through the coldest months.

"I would not be surprised by seeing continued or sustained increases in December," Marks said. "That's when we usually see an increase."