Are Experimental Drugs The Answer To Containing Ebola? 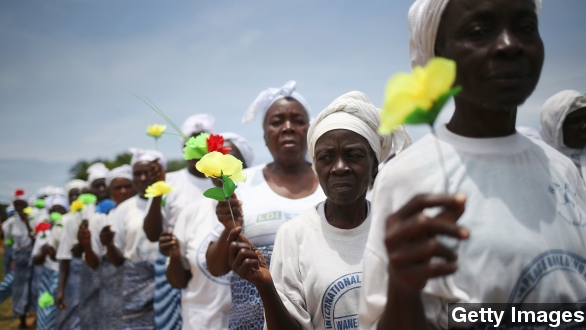 SMS
Are Experimental Drugs The Answer To Containing Ebola?

By Jasmine Bailey
August 16, 2014
The worst Ebola outbreak in recorded history has killed more than 1,000 people and infected more than 2,000.
SHOW TRANSCRIPT

The Ebola outbreak continues to grow across west Africa, and, according to estimates, the disease has now infected more than 2,000 people.

As the problem worsens, several experimental drugs have surfaced in an effort to help slow the virus' progress.

"In Nigeria there at least a dozen confirmed cases of Ebola. Supplies of an experimental drug called ZMapp have already been depleted. Officials are now hoping for a new drug."

"The outbreak has sparked a debate over the ethics of giving untested drugs to the affected patients."

But in countries with limited healthcare supplies, even in some of the best hospitals, are experimental drugs really what's going to help stop the rapid spread of Ebola?

Likely not. Bloomberg's Editorial Team suggests what's really needed are things like masks, gloves, gowns and boots. "This gear enables doctors and nurses to care for Ebola patients without risking their own lives by coming in contact with the virus in patients’ vomit, blood and feces. The equipment is in such short supply in Guinea, Liberia and Sierra Leone that, for lack of it, medical workers have fallen ill."

The Wall Street Journal points to a chilling example in a rural Liberian hospital where there was a glove shortage. One doctor used plastic grocery bags to cover his hands while delivery a baby. But "his staff didn't bother even with those when a woman in her 30s stopped by complaining of a headache. Five nurses, a lab technician—then a local woman who was helping out—cared for her with their bare hands. Within weeks, all of them died. The woman with a headache, they learned too late, had Ebola."

And after its chief doctor died from Ebola, Liberia's main hospital sits nearly abandoned. After panic set in, most patients were taken home and hospital staff left their posts.

REPORTER: "In other parts of Liberia there are similar stories."

NURSE: "We want to make sure that we have all protective gears available and protective materials that we need to protect ourselves."

In some of the more well-supplied areas, this is what healthcare workers must wear to protect themselves — head-to-toe body suits.

DR. SANJAY GUPTA: "We're talking about a pathogen that is not particularly contagious, doesn't spread easily from person to person. But it is highly infectious, meaning only a small amount can make somebody sick, even a droplet of something."

The World Health Organization claims the outbreak is being widely underestimated. Writing in a statement,  "WHO is coordinating a massive scaling up of the international response, marshalling support from individual countries, disease control agencies, agencies within the United Nations system, and others."

​And President Obama has made a similar promise to help the affected countries contain the outbreak — talking by phone with presidents in Liberia and Sierra Leone. (Video Via The White House)