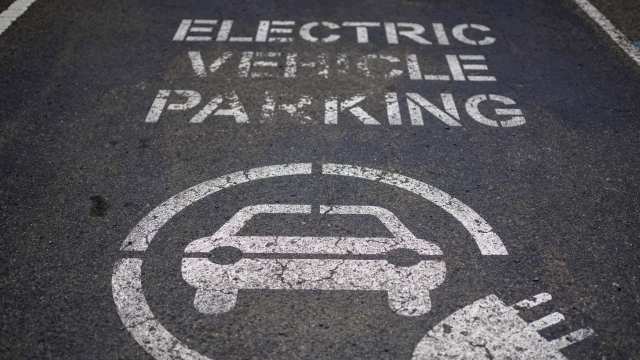 Getting more electric vehicles on the roads is a key part of President Joe Biden’s plan to fight off the worst effects of climate change.

You've heard about the perks and maybe balked at the costs, but with demand higher than ever, it seems like everyone is racing to get their hands on an electric vehicle.

"It's very inexpensive to operate, there's no maintenance costs except for tires," said Ron Zarbock, a Tesla owner.

Craig Bickmore is the director of New Car Dealers of Utah.

"That competition from the EV market is going to be hugely intense. You watch what happens in the next year in a half," said Bickmore.

One 2020 study projected in 2050 that half of all cars on the road could be electric. That would mean the world could slash CO2 emissions by up to 1.5 gigatons, which is equivalent to the current output of Russia.

That same study concluded electric vehicles are better for the climate in 95% of the world.

But researchers say the fact that driving an EV creates no emissions doesn't necessarily mean they're carbon-neutral.

EVs release zero emissions after wheels start turning. But how electricity is generated is a large part of their carbon footprint.

"Major corporations, states, countries around the world have determined that carbon is a problem and that they want to decarbonize," said John Wagner, the director of the Department of Energy's Idaho National Laboratory.

Fossil fuels like coal and natural gas produce over 60% of U.S. electricity. The rest is roughly divided between nuclear power and renewable energies.

A Reuters analysis estimated it'll take a typical EV one year on the road to offset its carbon emissions from manufacturing.

But that could take longer depending on the type of energy a car draws from. For example, an EV charged on a coal-reliant grid could have a catch-up period of five years.

David Victor, with the Brookings Institution, said the U.S. grid needs to nearly double in size to serve the skyrocketing demand.

"The grid infrastructure will need to get a lot larger, but it depends heavily on our ability to get people to charge at the right time of day," said Victor.

President Biden announced $900 million to install EV chargers along 53,000 miles of U.S. highways, as the show returned after a COVID-19 hiatus.

But some experts argue that more EVs will actually make the grid more resilient thanks to new "vehicle-to-grid" chargers. Those allow car owners to send energy back to the grid to reduce utility costs. This tech isn't widespread in the U.S. yet, and is still undergoing small-scale testing and research.

There are also "DC fast charging stations" which are currently available in public spaces. When you use those you're not actually connected to the grid. You're charging from a battery inside the charging station.

"So they're not going to be subjected to any kind of a flex alert or any kind of peak hour issues. You know, when you couple batteries with DC fast charging, you are no longer vulnerable to peak power issues and that is going to be especially true during heat waves," said Scott Painter, the CEO of Autonomy.

But Victor believes a fully implemented DC charging network is another two to five years from reality. Those batteries are also the most carbon-intensive part of an EV and are connected to numerous environmental and human rights concerns. Mining for tiny cells of lithium, cobalt and copper involves chemicals like sulfuric acid along with enormous amounts of water — about 500,000 gallons per metric ton of lithium. That can be detrimental to some mining communities.

"If a lot of water is being extracted we must slow down, decrease to allow these valleys to keep existing. Same for the oasis. For us the water is sacred," said Cenzano.

Ellen Lenny-Pessagno is the global VP of Government & Community Affairs at Albemarle.

Why Arenât There More Electric Vehicles On The Road?

Electric vehicles are on the rise, as many consumers are considering an electric car over gasoline cars to save money.

The energy to extract the minerals and build lithium-ion batteries also requires burning fossil fuels. And the country that uses the most fossil fuels also holds 80% of the world's EV battery supply — China.

Mike O'Kronley is the CEO of the sustainable battery maker Ascend Elements and said his company figured out a way to recycle lithium-ion batteries into new batteries that are longer-lasting, faster-charging and less-polluting.

"We have to develop new ways of recycling these materials otherwise we'll continue to destroy our planet," he said.

This could be a game changer considering Greenpeace predicts by 2030 drivers will toss out more than 12 million tons of lithium-ion batteries.

"There's a need — and it's not just a want, it's a need — to conserve our resources, to capture these critical elements, these critical materials and transform them and use them over and over again," said O'Kronley.

By Greenpeace's estimate repurposing EV batteries could save over 63 million tons of CO2 emissions from new battery manufacturing.

Recycling also keeps batteries from turning into toxic trash in landfills which could leak heavy metals into the environment.

Recycling batteries is a lot more complicated than recycling our regular trash and there isn't a widespread system yet. Right now the estimated recycling rate is just 5%. But companies like Tesla and Nissan are increasing recycling capacity at their gigafactories.

And last year American and British researchers discovered a new technique to recycle while cutting costs and emissions.

A chorus of scientists agree: While EVs have drawbacks, they're still a greener option for the planet than gas cars. And the only true zero-emissions vehicles are the ones that aren't made.