Are Colleges Too Politically Correct? Obama, Others Think So 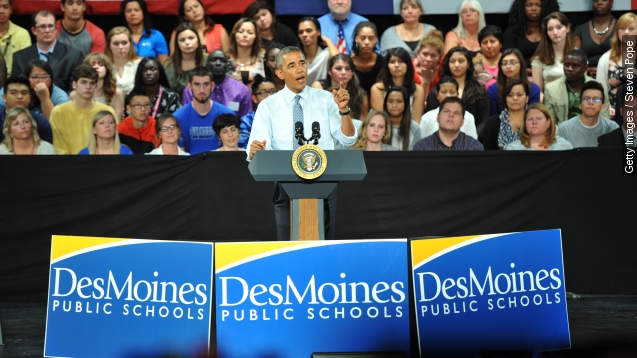 "I think the big problem this country has is being politically correct," said Donald Trump.

On Monday, President Barack Obama told a crowd in Des Moines, Iowa that hiding from opposing views shouldn't be part of the college experience. (Video via The White House)

He said, “The purpose of college is not just to transmit skills, it's also to widen your horizons. I don't agree that you, when you become students in college, have to be coddled and protected from different points of view."

He was remarking on something that's come up a lot in the media recently. For instance, The Atlantic's front spread for September was an article about the phenomenon it dubbed "The Coddling of the American Mind."

The article argues students want "to scrub campuses clean of words, ideas, and subjects that might cause discomfort." That includes putting warnings around any content that could be seen as sexist or racist or that references subjects like rape and abuse.

"This is a generation of students that was raised in fundamentally different ways. By the time these students get to college they expect that adults are going to protect them," said Jonathan Haidt, co-author of "The Coddling of the American Mind."

Some have argued political correctness is a tool used by the privileged to sideline the less-privileged.

And others suggest it's not even a thing. A writer for Vox wrote, "political correctness isn't a 'creed' at all. Rather it's a sort of catch-all term we apply to people who ask for more sensitivity."

Yet many comedians have said they avoid performing on college campuses because the crowds are just too sensitive. In June, Jerry Seinfeld told ESPN radio college students "just want to use these words: ‘That’s racist;’ ‘That’s sexist;’ ‘That’s prejudice.' They don’t know what the hell they're talking about.”

And Bill Maher echoed Seinfeld's sentiment, "The PC police aren't saying you can't make jokes, you just can't make them about a protected species. Americans have got to learn how to take a joke."