Are 'Caravans' A Sustainable Strategy For Migration? 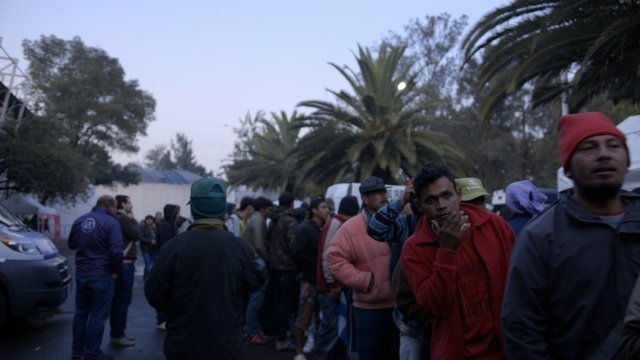 SMS
Are 'Caravans' A Sustainable Strategy For Migration?

By Sebastián Martínez Valdivia
November 15, 2018
A second group of Central Americans, primarily from El Salvador and Honduras, have arrived in Mexico City on their way to the U.S. border.
SHOW TRANSCRIPT

The president has called it an invasion. Media outlets call it the caravan. And here in Mexico, it's been called "el éxodo" — the exodus. Whatever the name, the group of thousands of Hondurans and other Central Americans has started to arrive at the U.S. border in Tijuana.

One group looking to see whether they're let into pursue asylum are 2,400 Central Americans sheltering in Mexico City. Over the past few days, the predominately Salvadoran group has gathered at the Estadio Palillo Martínez, an open-air stadium in the city. 26-year-old Walter Luna is from El Salvador. He says his personal experience with the country's violent crime drove him to leave San Salvador with a group of 2,000 others on Oct. 31.

"In my case, I lost my dad to violent crime. A gang killed him with machetes in a river. They cut him to pieces. The lawlessness took him from me," Luna said.

Violence and a lack of political and economic stability were common reasons people gave for leaving their homes. And Professor Cecilia Imaz Bayona, an immigration researcher at the National Autonomous University of Mexico, says the media attention the caravans have gotten recently has bolstered their numbers.

"It went viral. People saw the opportunity to join. They know that crossing Mexico is full of risks — they could be assaulted, they could be kidnapped or used by organized crime as mules."

Imaz says the groups have found safety in numbers, and in international human rights pacts Mexico is party to and has advocated for. Members of the group also said they'd received support from several organizations along the way.

Guadalupe Chipole is the chief coordinator of an NGO feeding people at the stadium. She says that while the generosity of volunteers in Mexico City was enough to support the two large caravans that have already passed through, it's unclear if more will follow.

"All of Central America is waiting to see what the first group achieves, because the signs aren't good. Wherever they end up, and however they manage to survive — that message will get back to their towns."

With a new federal government coming to power in Mexico soon, and a populist president-elect who has expressed support for the migrants, the future for these groups is hard to predict. But for Luna, the future is focused on one thing.