Are All Women Represented In Today's Feminist Movement? 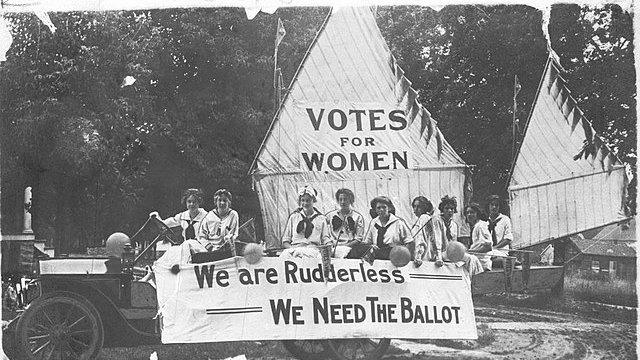 SMS
Are All Women Represented In Today's Feminist Movement?
By Newsy Staff
By Newsy Staff
March 2, 2022
As we celebrate women's history month, we take a look back at women's suffrage, from the birthplace of feminism to now.

It's Women's History Month, and we're taking a look at some barriers broken by women — both in history and in recent history.

Just last week, the first Black woman was nominated to the Supreme Court, and in the most recent presidential election, the U.S. got its first woman vice president.

"Hopefully this can be the dawn of a new day at U.S. Soccer," said Megan Rapinoe, U.S. Women's National Team player. "They certainly need to be much better, and this is the perfect starting point."

In history class, Americans are taught that the original feminist movement changed and addressed the big problems, and while it did change a lot, the movement didn't necessarily start out with all women in mind.

Let's jump back to the 1848 Seneca Falls Convention. Many U.S. students were taught that this was the birthplace of American feminism, but back then it was only open to White women.

At this women's rights conference, well-known activist Elizabeth Cady Stanton drafted The Declaration of Sentiments, a document calling for women's equality and suffrage — meaning the right to vote. But this part of the movement prioritized getting the ballots of White women counted; Black and minority women were excluded entirely and left to fight their own battle.

Stanton and Susan B. Anthony were also against Black men having the right to vote. Anthony once said she'd rather cut off her arm than support the right for Black men to vote before White women.

So, if only White women were at the Seneca Falls Convention, where was everyone else?

Black women were already organizing about their rights before Seneca Falls.

A few months before, there was a conference at the African Methodist Episcopal Church, one of the largest Black denominations at the time. Black women started a conversation of their own about women's rights. They were fighting for Black women to have the right to be licensed preachers.

There were several prominent women of color who advocated for women's rights in the early 20th century who are often overlooked.

There was Jovita Idár, a Mexican American activist who wrote articles encouraging women to vote in her local paper. She founded the League of Mexican Women and believed in the power of education. A big part of her work was helping poor children and urging schools to teach in both English and Spanish.

Mabel Ping-Hua Lee was a teenage Chinese American activist who led thousands of women in New York City in one of the biggest suffrage parades. Her fight for women's rights in the U.S. was inspired by what was happening during the Chinese Revolution, when women there starting to get the right to vote.

Ida B. Wells, a Black suffragist, started the Alpha Suffrage Club. She campaigned for anti-lynching and believed that the right to vote could help put an end to it.

Native American suffragist Zitkala-Sa became the secretary of the Society of American Indians and was very active in the women's rights movement. She was fighting not just for U.S. citizenship but also for citizenship in tribal nations and the rights to land. The ability to vote would help natives save their land and their communities.

More than 70 years after the Seneca Falls Convention, the 19th amendment was ratified in 1920, giving women the right to vote — or so we thought.

The amendment said voting would not be denied on account of sex, but many states still had rules in place where they would still deny people based on race. So, if you were a woman of color, your race was considered before your gender. It took decades before voting became more inclusive.

Chinese Americans gained the right to vote in 1943 after the repeal of the Chinese Exclusion Act, and many other Americans of Asian ancestry couldn't become citizens or vote until 1952.

Native Americans couldn't vote in all states until 1948.

For Black men and women who lived in the South, Jim Crow laws still presented many obstacles, like poll taxes and literacy tests making it nearly impossible for them to actually take advantage of that opportunity. Their fight for voting rights became intertwined with the civil rights movement. They gained the right to vote in 1965 with the passage of the Voting Rights Act.

In 1975, the Voting Rights Act expanded to require voting materials be translated into languages other than English. There's still seen a push for this in recent years to help Hispanic and immigrant voters exercise their right.

Still, with all this progress that has been made, there are still battles over voting restrictions happening today.