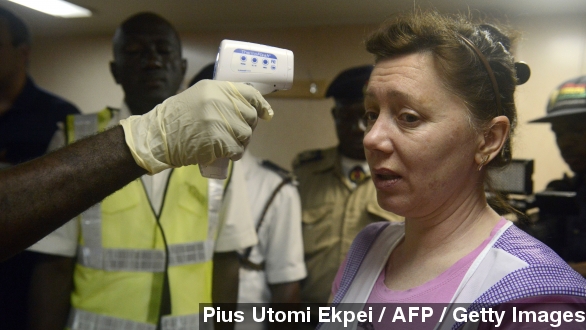 By Madison Burke
October 10, 2014
Airport health screenings have proved ineffective in containing diseases in the past. Some believe they're just an effort to keep the public calm.
SHOW TRANSCRIPT

This is what temperature screening looks like — and starting next week it's how some passengers at five U.S. airports will be screened for fever.

Fever — which is a symptom of Ebola. (Video via ABC)

And after the death of an Ebola patient in Dallas, health officials are keen to assure the public they're doing everything they can to prevent the disease's spread.

But a tropical disease specialist told Canada's CBC, the temperature screenings in particular are "Mostly a waste of time. This is optics to make the country feel safer."

Making people feel safer could be a valid concern, though. A poll released by CNN says 1 in 4 Americans is worried about getting Ebola.

But it's not clear whether taking temperatures at airports would be effective at assuring the public or catching potential Ebola victims.

You can obviously have a high temperature from more than just Ebola. Not to mention the fact that it's flu season.

Ebola takes between 2 and 21 days to incubate. So, someone carrying the disease likely would not have a fever in its early stages.

Thomas Eric Duncan, the Dallas patient who died from the disease, had his temperature taken several times before he left Africa, but it wasn't until days later when he arrived at his Texas home that he began having symptoms.

We have seen temperature screening at airports not really work before. In 2003, around 1.8 million people were screened in airports for SARS and almost 800 of those people were found to have elevated temperatures. However no one who was found with SARS.

Which kinda raises the question of whether airport screenings are just a formality, an attempt by the government to have the appearance something is being done.

Georgetown University professor Larry Gostin told NPR governments are, "Under a lot of pressure to do something [to] make the public feel reassured, even if it really doesn't make them safer."

But the much more extreme step of banning travel from Ebola-stricken countries is unlikely — and arguably unnecessary. The New York Times is reporting the Obama administration may be exploring additional screening measures.