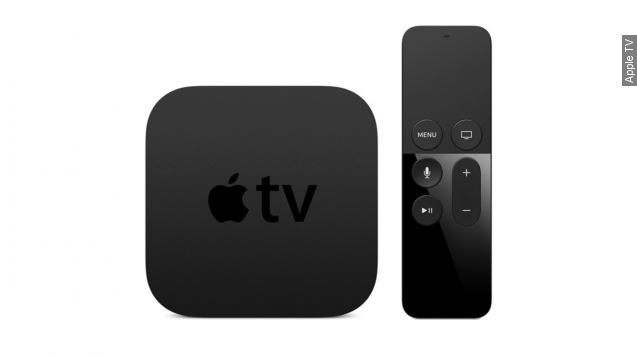 SMS
Apple Updates Apple TV With Focus On Apps
By Mikah Sargent
By Mikah Sargent
September 9, 2015
Apple revealed a huge update for the Apple TV. Users will be able to control their TV with Siri voice controls and a new touch-sensitive remote.
SHOW TRANSCRIPT

It's finally happened, folks! After years of rumors and speculation, Apple pulled back the curtains on an updated Apple TV. (Video via Apple)

And the company's narrative for the set-top box it's calling "the future of television" is centered squarely around apps.

"Our vision for TV is simple and perhaps a little provocative. We believe the future of television is apps," Apple CEO Tim Cook said.

Judging by the announcement that proceeded Tim Cook's provocative vision, though, it actually seems to be about an updated interface, new interactions and games, as well.

"Notice the 3-D effect on the artwork as I move around. ... The movie poster follows the movement of my thumb on the remote, really makes it come to life."

As for new interactions, Apple revealed a new remote with a glass touchpad so you can navigate using many of the gestures you're used to on the iPhone.

You can also use your voice; Siri helps you search through content and control the Apple TV.

The company spent a lot of time featuring Apple TV's gaming abilities. Thanks to the motion-sensitive remote — think Nintendo Wii — you can slash and swipe your arm to battle your way through loads of games.

Apple has also mentioned third-party controllers on its site, so it will likely look to other companies for added interactivity going forward.

The new Apple TV will start at $149 when it launches in late October.

This video includes an image from Getty Images and images from Apple.