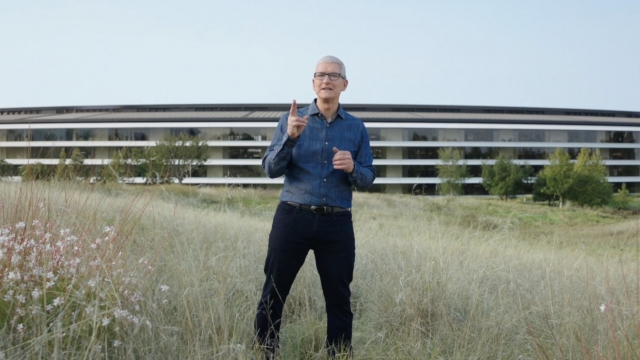 Cued by the startup sound familiar to Mac users, Apple's CEO Tim Cook introduced another round of product updates.

"Our second event in just over a month," he said.

This time, just in time for holiday shopping. Apple announced a major update to its wireless, in-ear headphones.

"We've got some exciting news about AirPods," Cook said.

Exciting because it has been two years since the last AirPod refresh. The new version adds features found in the higher-priced AirPod Pro models including longer battery life, water resistance and Apple's proprietary 3D sound technology.

The headphones, which ship October 26, go for $179 – a $20 price increase over the previous generation. Apple has dropped the price on its older ones to a less-painful-when-you-lose-them $129.

Apple also introduced new colors of its HomePod mini smart speakers. In so doing, it's keeping up with the Joneses ... well, the Googles — who now sell blue and orange versions of their competing product, the Nest.

The biggest news Monday was on one of Apple's biggest ticket items — its MacBook Pro laptops — getting their biggest update in years.

Analysts tell Newsy that Apple's decision a few years ago to do away with Intel's chips and begin making its own silicon is proving particularly advantageous right now because the chip shortage affecting so much of the tech industry doesn't appear to be holding back Apple's computer production.

Apple is setting expectations for consumers that if they're ready to spend big on a new laptop, they'll have them for the holidays.