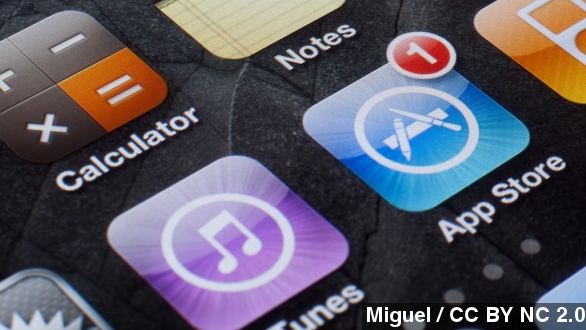 Notoriously secretive tech company Apple has pulled back the curtains to tout some record-breaking statistics.

$10 billion. That's the total revenue developers earned from App Store sales in 2014 alone. And the Cupertino company started off 2015 with another record-breaking stat: users spent nearly half a billion dollars on apps in the first week of January alone. (Video via Apple)

And the big-numbered stats didn't stop there, folks. Apple put together a graphics-packed page of data about the company's contributions to job creation.

The company says its App Store has helped create more than 627,000 jobs since it launched in 2008. Its 265 U.S. retail stores employ 30,000 employees, and 20,000 construction jobs were created to make those stores. One final number: 3 billion, as in $3 billion spent on U.S. suppliers for its tech products.

And it didn't take long for outlet after outlet to report on Apple's number-packed news.

TechCrunch was eager to remind us Apple's announcement was likely no coincidence. The company has a history of stealing the spotlight from CES while the trade show is going on. (Video via International CES)

One TechCrunch writer said, "It’s CES, which means Apple has just dropped its annual reminder that plenty of folk won’t care a fig for all those non-iOS consumer electronics that are currently getting manhandled in the Mojave desert."

But a writer for The Wall Street Journal suggests there's a bit more to the announcement than overshadowing CES. Apple has received some flak for moving much of its product assembly overseas. (Video via ABC)

The announcement is a big, flashing billboard of sorts that says, "Look! We're responsible for more than a million U.S. jobs."

And the Journal also notes the announcement works as a recruiting tool. The last statistic from Google — in mid 2014 — showed the company paid out $5 billion to its Android developers in a 13-month period. That's half the amount Apple devs made in 2014. (Video via Google)

In other words, revealing these statistics is a smart move for Apple by all accounts. You can check out the entire rundown on Apple's job creation page.

This video includes images from Getty Images and Apple Inc.