Apple Music Is Here, But Can It Set Itself Apart? 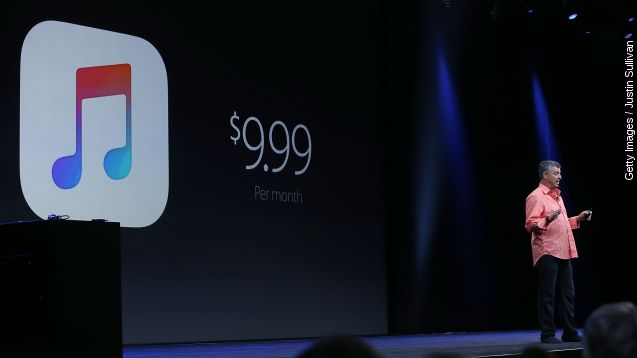 SMS
Apple Music Is Here, But Can It Set Itself Apart?
By Leah Becerra
By Leah Becerra
June 8, 2015
Apple announced Apple Music at its Worldwide Developers Conference Monday, but the list of features seemed similar to what's already out there.
SHOW TRANSCRIPT

Monday at its Worldwide Developers Conference, Apple announced what we were all anxiously waiting for: Apple Music.

That's right, this won't just be a streaming music service. Apple Music will have a 24/7 global radio station called Beats 1, and the app will also let artists share content with fans.

So imagine Spotify — a place where you can listen to and stream a bunch of music you don't have — but picture if it were made by Apple.

Now that application also interfaces with your iPhone, iPad and all those other i-devices you already own.

But just based off the conference demo, we're failing to see the real difference between Apple Music and a lot of other services. And we're not the only ones.

On Twitter, one user said: "This #Apple Music thing is really, really UNimpressive. Tim Cook used the 'One more thing' line for this?!"

And another said, "So far Apple Music hasn't shown me anything to lure me from Spotify."

Apple's new music streaming service launches June 30 and will cost $9.99 a month — or $14.99 for a family plan with up to six users — but the first three months are free.

Which is good because the jury is pretty split right now. Maybe some one-on-one time without a fee involved will help a lot of potential Apple Music users make up their minds.