Apple Music Comes To Android, But It's Missing A Few Things 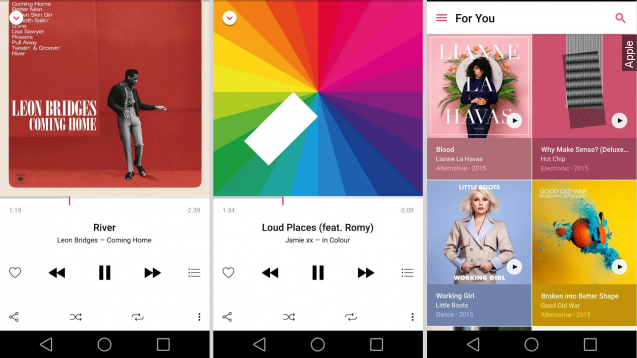 More than four months after its iOS launch, Apple Music has arrived on Android. Well, in beta at least. (Video via Apple)

From the looks of it, the beta app is close to what will eventually be a final version. Apple says it's currently missing music videos, it doesn't have a family membership option, and the sign-up process needs a bit of work.

But Apple exec Eddy Cue told Billboard, "If you've used it on iOS, you've used it for Android," meaning the app experiences on Android and iOS are nearly identical.

Android users should feel right at home in the app. Cue told TechCrunch Apple designed the app within Android's design constructs: "It's a full native app, so it will look and feel like an Android app. The menus will look like Android — you know the little hamburger they use on the top."

The company recently announced Apple Music boasts 15 million users — 6.5 million of whom pay for it. (Video via Apple)

Which sounds impressive until you compare that to the 20 million people who pay for Spotify. Then it becomes immediately clear why Apple Music can't be exclusive to iOS — the company needs to tap into the massive Android market. (Video via Spotify)

Like it did on iOS, Apple is offering Android users three months free. You can find Apple Music for Android in the Google Play store.