Apple Is Making Some Big Changes With Its Next Software Updates 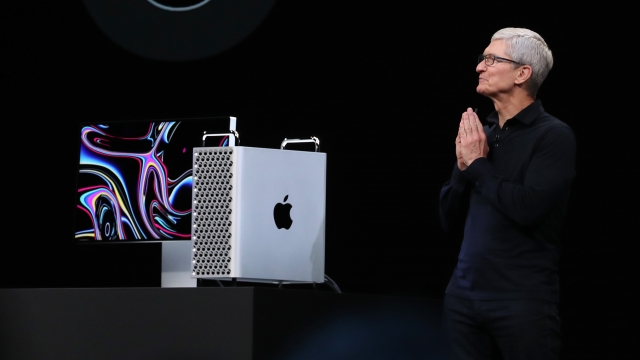 SMS
Apple Is Making Some Big Changes With Its Next Software Updates
By Cristina Mutchler
By Cristina Mutchler
June 3, 2019
Apple announced upcoming software features Monday, including a new App Store for Apple Watch, a separate iOS for iPad and the end of iTunes.
SHOW TRANSCRIPT

Apple has officially gone to the dark side.

That means apps like iMessage and Calendar will have a darker appearance, meant to be easier on the eyes than a bright background.

The Mac Pro desktop is also getting a makeover. It'll have a new, tower look and more horsepower — and cost roughly $6,000.

That's in addition to overhauling the iPad, which will work on a separate operating system, iPadOS. Apple says that'll make it easier to multitask, type, scroll and share files.

And Apple's smartwatch is branching out even further. The Apple Watch will have its own App Store, and health updates will allow users to track hearing loss and menstrual cycles.

The company's making it clear that it's still focused on the issue of data privacy. A new sign-in feature will let users log in to apps and services with Face ID instead of by providing personal information.

Finally, say RIP to iTunes. Apple's replacing it with three separate desktop apps for music, podcasts and TV. That's a move it's been hinting at by pushing users toward its Apple Music subscription service.

Along with those major feature updates, the Apple TV home screen and Maps app will also see upgrades.

The next version of iOS is expected to be launched with the new iPhone this fall.