Apple Got The Rifle Emoji Banned From Keyboards 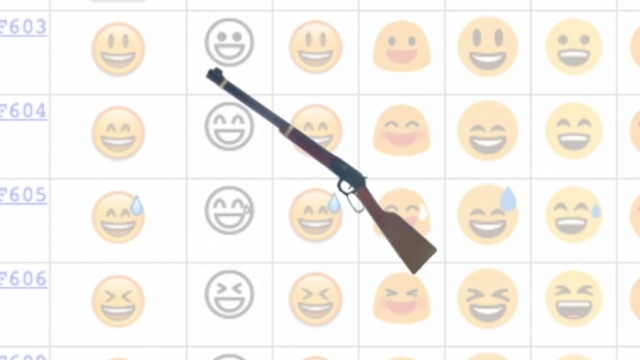 SMS
Apple Got The Rifle Emoji Banned From Keyboards
By Calvin Stovall
By Calvin Stovall
June 18, 2016
You can still buy assault weapons in gun stores across the U.S., but Apple said it didn't want them in its app store.
SHOW TRANSCRIPT

The Unicode Consortium, which oversees the "official" emoji character database, agreed to remove a rifle glyph from a June update to the standard keyboard.

Apple reportedly led the push along with Microsoft, saying the existing handgun emoji is sufficient.

The rifle debate dates back to October, when a British gun control group argued "it would be familiarizing and popularizing the image of a weapon, which is not a good idea."

Unicode President Mark Davis told the New York Times, "Some people are bothered by the inclusion of the rifle as a candidate, but the reason that's included is because shooting is an Olympic sport."

The rifle was one of many Olympic-themed emoji apparently meant to coincide with this year's Rio games.

Unicode eventually gave in to critics after a secret meeting last May, over a year before a semi-automatic weapon was used in the Orlando nightclub massacre.

"I think what we're seeing here with the rifle, is these big vendors and tech companies truly realizing what a big deal these emojis are," an anonymous Unicode member told Buzzfeed.

"(Emoji) is not a language, but conceivably, it could develop into one, like Chinese did," Davis said last year.

To be clear, the rifle will still appear as a black and white image in the Unicode Character Database. It just won't be included on standard emoji keyboards.

This video includes clips from C-SPAN and images from Twitter and Unicode.