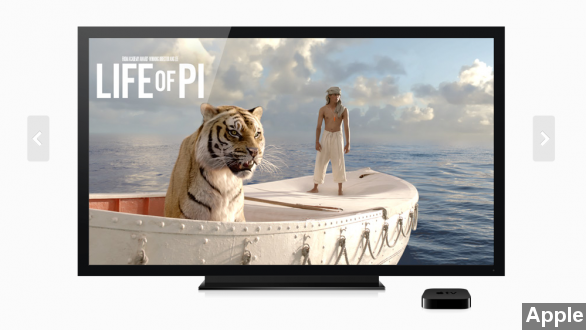 By Adam Falk
March 24, 2014
Apple and Comcast are reportedly discussing a streaming service that would use an Apple set-top box and Comcast pipes to bypass Internet congestion.
SHOW TRANSCRIPT

Apple stock is up following a report from The Wall Street Journal yesterday.

In it, the paper reports Apple is in talks with Comcast about a streaming-TV service. It would run on a to-be-determined Apple set-top box and receive what's called "managed service," meaning:

"It gets a different flow of traffic, gets a little bit better treatment."

More specifically, video streaming to Apple's box would separate from regular Internet traffic on the "last mile" of its trip to your home.

This would prevent the Apple-delivered video from getting bogged down by other users trying to access Internet content at the same time.

You might have heard some complaints from "House of Cards" fans saying Frank Underwood sometimes looked a little fuzzy. Well, this would make it so users get a cleaner stream. (Via Netflix / "House of Cards")

Which could make Apple's offering more desirable than, say, Roku's or Google's. Both of those — like the current Apple TV — rely on the Internet alone.

Could being the key word. The Information has confirmed WSJ's report, and it echoes an important point, saying, "It's far from clear [the companies] will reach a deal."

TheStreet notes, "Comcast would have to make significant investments in network equipments and technology in order to be able to deliver what Apple wants."

​But if the two can reach an agreement, you can bet on more than a clearer picture for Netflix.

With the acquisition of Time Warner, Comcast has become the U.S.' largest cable provider. Apple's box would reportedly stream live and on-demand TV programming as well — something its hockey puck doesn't offer.

But say Apple and Comcast took this thing to its rumored conclusion. That could mean further challenges for future innovators.

We already have Netflix agreeing to pay Comcast to stream its content faster, thanks to an appeals court striking down "net neutrality." (Via USA Today)

Then, we could have Apple teaming up with Comcast to "bypass net congestion" altogether. (Via The Verge)

If you're a streaming startup, this isn't good news. But if you're a video streamer, getting live and on-demand access to a clean feed, well, that's your hope, right?