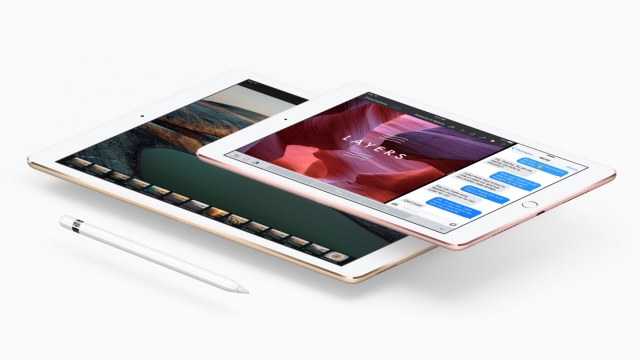 Apple announced a new iPad Pro during the company's March 21 event. The tablet is smaller than the 12.9-inch iPad Pro but just as powerful.

Apple's March event is over, and the rumors held up. Apple announced a new 9.7-inch iPad Pro — the same size as the current iPad Air model.

"An entirely new iPad Pro, based around a 9.7-inch Retina Display ... it is an iPad Pro through and through," said Apple Senior Vice President Phil Schiller.

The new, smaller iPad Pro and the current, larger iPad Pro are much the same in terms of performance, but they do differ slightly. The small Pro's display is more advanced — it can produce better, more accurate colors and can adjust its color based on lighting conditions.

The small Pro touts the same four-speaker system as its larger counterpart and packs in the same kind of processor.

However, if you're prone to snapping photos with your iPad, you'll want to go with the small Pro — it has a 5-megapixel front-facing camera and a 12-megapixel back-facing camera. The large Pro has 1.2-megapixel and 8-megapixel cameras, respectively.

The small Pro supports the same accessories as the large Pro — you can draw with the Apple Pencil and type with a new keyboard cover designed specifically for the smaller size.

The 9.7-inch iPad Pro starts at $599 for the 32GB base model and goes up from there. For the first time, Apple's offering a 256GB iPad in this smaller tablet size. The new, smaller Pro will be available on March 31.

This video includes images and clips from Apple.