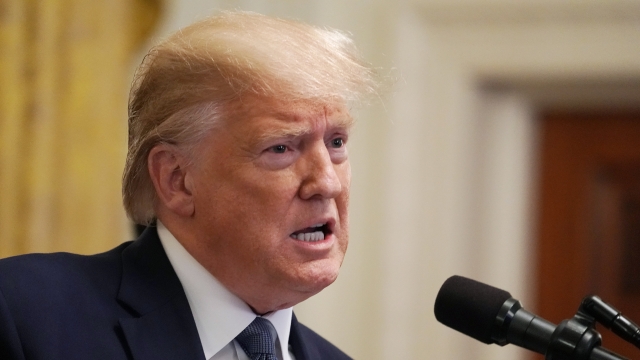 SMS
Appeals Court: Trump Accounting Firm Must Hand Over His Tax Returns
By Antoinette Miller
By Antoinette Miller
November 4, 2019
The court upheld a subpoena that was issued in the Manhattan DA's investigation of alleged "hush money" payments to Stormy Daniels.
SHOW TRANSCRIPT

On Monday, a federal appeals court once again ordered President Donald Trump's accounting firm to hand over at least eight years of his personal and corporate tax returns. This time, the three-judge panel said the president cannot appeal the ruling.

The office of Manhattan District Attorney Cyrus Vance Jr. first subpoenaed President Trump's accounting firm, Mazars USA, in August. They're investigating the president's role in alleged hush money payments made by Michael Cohen, his former personal attorney, to Stormy Daniels. She alleged during the 2016 presidential campaign that she'd had an affair with President Trump.

Investigators want to know if President Trump broke any New York laws when he and the Trump Organization reimbursed Cohen for the payments. The president has denied Daniels' allegation, as well as a similar allegation by Karen McDougal, and has said the payments to Cohen were for a personal matter and did not involve campaign funds.

President Trump has made repeated efforts to withhold his tax returns, but in light of this ruling and a proposed deal with Vance's office, the case is likely on its way to the U.S. Supreme Court.

The president's lawyer Jay Sekulow said: "The issue raised in this case goes to the heart of our republic. The constitutional issues are significant."

The 2nd Circuit Court of Appeals, which handed down Monday's ruling, said, "Presidential immunity does not bar the enforcement of a state grand jury subpoena directing a third party to produce non‐privileged material, even when the subject matter under investigation pertains to the president."