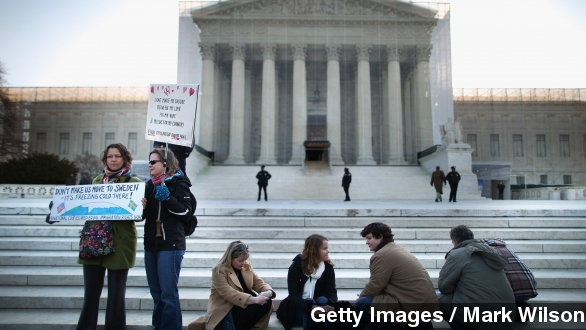 A three-judge panel at the 6th Circuit Court of Appeals bucked the national trend Thursday, upholding four states' bans on same-sex marriage and making it much more likely the issue will finally go to the Supreme Court.

The court heard arguments over same-sex marriage bans in Kentucky, Michigan, Ohio and Tennessee, all of which had been overturned by lower courts.

That puts the 6th Circuit Court in opposition to four other circuit court rulings, all of which had struck down the state bans.

The language used is interesting: Judge Jeffrey Sutton began the majority opinion by basically saying same-sex marriage is so close to being the law of the land, it should be up to voters, not courts, to finish the job. (Video via Robert H. Jackson Center)

It said if the marriage debate is settled by the courts, it would "perpetuate the idea that the heroes in these change events are judges and lawyers," and it would be better if "the people, gay and straight alike, become the heroes of their own stories."

That kind of reasoning seems a little unusual and was quickly picked up by critics.

A New York Times editor said, "Who cares about the identity of the 'heroes' of 'change events'? Can most Americans name the lawyers or judges who decided Brown v. Board of Education?"

The dissenting judge, Martha Daughtrey, was even more harsh. She accused her fellow judges of sidestepping the issue, saying the ruling "would make an engrossing TED Talk or, possibly, an introductory lecture in Political Philosophy. But as an appellate court decision, it wholly fails to grapple with the relevant constitutional question." (Video via Tennessee Supreme Court Historical Society)

But for a decision based on the inappropriateness for the courts to settle the debate, the move makes the outcome much more likely.

Nina Totenberg via NPR: "This could go first for a full en banc decision, and if it doesn't change things then we'll have a conflict and the Supreme Court eventually, probably next year, will have to decide this."

"En bank meaning all the judges."

"All the judges on this court, not just three."

The Supreme Court has so far avoided a firm decision on same-sex marriage, which is why some proponents say the circuit court ruling could actually further the cause by finally settling the debate.

The Human Rights Campaign, an LGBT rights group, said, "Now, more than ever before, the Supreme Court of the United States must take up the issue and decide once and for all."

If the case does go to the Supreme Court, there could be a decision by the end of next June.

This video includes images from the Library of Congress and Getty Images.