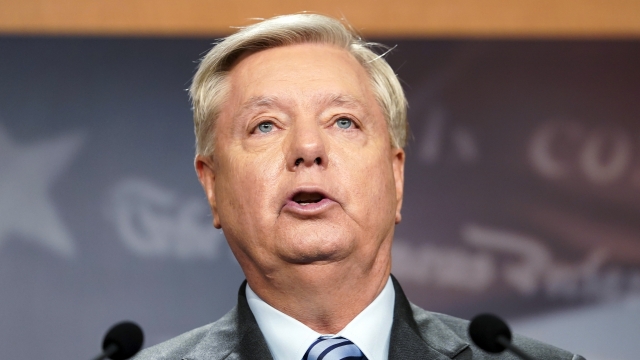 Graham had challenged his subpoena, saying his position as a U.S. senator protected him from having to testify in the state investigation.

U.S. Sen. Lindsey Graham must testify before a special grand jury investigating whether then-President Donald Trump and others illegally tried to influence the 2020 election in Georgia, a federal appeals court said Thursday.

The ruling by a three-judge panel of the 11th U.S. Circuit Court of Appeals paves the way for Fulton County District Attorney Fani Willis to bring Graham in for questioning. She wants to ask the South Carolina Republican about phone calls he made to Georgia Secretary of State Brad Raffensperger in the weeks after the election.

Raffensperger said Graham asked whether he had the power to reject certain absentee ballots, something Raffensperger took as a suggestion to toss out legally cast votes. Graham has dismissed that interpretation as "ridiculous."

Each of the petitions filed Friday seeks to have the potential witnesses appear in November after the election.

Graham could appeal the ruling to the full appellate court. An attorney for Graham deferred comment Thursday to a spokesperson for the senator's office, which did not immediately comment on the ruling.

Graham had challenged his subpoena, saying his position as a U.S. senator protected him from having to testify in the state investigation. He has also denied wrongdoing. In a six-page order, the judges wrote that Graham "has failed to demonstrate that this approach will violate his rights under the Speech and Debate Clause."

Willis opened the investigation early last year, shortly after a recording of a January 2021 phone call between Trump and Raffensperger was made public. In that call, Trump suggested Raffensperger could "find" the votes needed to overturn his narrow loss to Democrat Joe Biden.

Willis requested a special grand jury, saying the panel's subpoena power would allow the questioning of people who otherwise wouldn't cooperate with the investigation. She has since filed several rounds of paperwork with the court seeking to compel the testimony of close Trump advisers and associates.

Some of those associates include former White House counsel Pat Cipollone, who has testified before the special grand jury, according to a person familiar with Cipollone's testimony who spoke to The Associated Press on Thursday on condition of anonymity to discuss a private appearance. Cipollone's appearance was first reported by CNN.

Cipollone vigorously resisted efforts to undo the election and has said he did not believe there was sufficient fraud to have affected the outcome of the race won by President Biden.

Graham was in the first group of people close to Trump whose testimony Willis sought to compel in a batch of petitions filed with the court in early July. He challenged his subpoena in federal court, but U.S. District Judge Leigh Martin May refused to toss out his subpoena. Graham then appealed to the 11th U.S. Circuit Court of Appeals.

Graham's lawyers argued that the U.S. Constitution's speech or debate clause, which protects members of Congress from having to answer questions about legislative activity, shields him from having to testify. He contends that the call he made to Raffensperger fare was protected because he was asking questions to inform his decisions on voting to certify the 2020 election and future legislation.

Lawyers on Willis' team argued that comments Graham made in news interviews at the time, as well as statements by Raffensperger, show that the senator was motivated by politics rather than by legislative fact-finding.

They also argued that the scope of the special grand jury's investigation includes a variety of other topics that have nothing to do with the Raffensperger call. They also want to ask Graham about his briefings by the Trump campaign, including whether he was briefed on the Trump-Raffensperger call, and whether he communicated or coordinated with Trump and his campaign about efforts to overturn the election results in Georgia and elsewhere.

Graham's lawyers also argued that the principle of "sovereign immunity" protects a U.S. senator from being summoned by a state prosecutor.

Even if the speech or debate clause or sovereign immunity didn't apply, Graham's lawyers argued, his status as a "high-ranking official" protects him from having to testify. That's because Willis has failed to show that his testimony is essential and that the information he would provide cannot be obtained from someone else, they argued.

In their ruling Thursday, the appellate judges ruled that Willis "can ask about non-investigatory conduct that falls within the subpoena's scope" but "may not ask about any investigatory conduct," noting that Graham could note any issues over specific areas at the time of his questioning.

Others have already made their appearances before the special grand jury. Former New York mayor and Trump attorney Rudy Giuliani, who's been told he could face criminal charges in the probe, testified in August. Attorneys John Eastman and Kenneth Chesebro have also appeared before the panel.