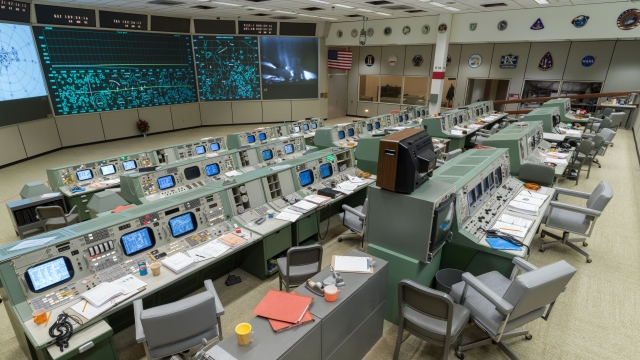 On July 20, 1969, Neil Armstrong took one giant leap for mankind when he became the first person to step onto the moon.

The historic mission wouldn't have been possible without the NASA flight controllers in the Apollo Mission Control Center almost 240,000 miles away in Houston, Texas.

"We weren't even sure if we could get them back," Sandra Tetley told Newsy's Katherine Biek.

Sandra Tetley, a historic preservation officer at the Johnson Space Center, helped lead a $5 million, multi-year effort to restore Mission Control so that it looks exactly as it did during the Apollo 11 mission.

The room had seen a lot of action. NASA flight controllers oversaw operations for dozens of space flights out of it, including missions for the Gemini, Apollo and Space Shuttle programs. But when NASA decommissioned the room in 1992, it wasn't exactly kept under lock and key.

"It was open. If you could get into the building, you could get on the floor," Tetley said. "You could sit at the consoles, dial the phones, press the buttons. They had movie night in here. They would watch 'Apollo 13' in here."

In 2013, Tetley decided she wanted to do something to enhance the experience for visitors touring the room. But since it's a National Historic Landmark, she had to first get the National Park Service on board.

"There was no budget for a restoration. … So in the grant, I had just applied for something because I wanted people to experience the moon landing, because that was so significant that happened here. And that just started the ball rolling. It got the attention of the Park Service, and they encouraged us to go forward."

But even with the Park Service's permission, things weren't immediately go for launch for Tetley and her team.

"Raising money. That was a big issue because NASA did not have a budget for this. We barely have a budget to fly. So it was very difficult."

After months of researching, interviewing flight controllers about their memories of the room and waiting for the money to come in, the project's full restoration finally started in fall 2017.

"We had estimated it would take between 24 and 36 months to do the room correctly. And we were compressed down to about 16 to 18 months."

Tetley's team rebuilt the consoles to resemble their Apollo 15 configuration, since that was considered the pinnacle of the program's technology. But the rest of the room was made look exactly like it did in 1969 — even the carpet, ceiling tiles and wallpaper.

"We were just going to leave the wallpaper. But one day we came in and somebody had removed a fire extinguisher off the wall for some reason. And behind it was a piece of original wallpaper."

The team contacted the original wallpaper's manufacturer. It had been purchased by another company, but the roller for the pattern was still in its warehouse.

But it's the smaller, personal items strewn across the consoles — things like coffee mugs, pens and ashtrays — that really make the room come alive.

"They are so big. You could eat off that."

"Yes. We had a guy who actually got original ashtrays from this room when they were closing down the room. … And he said he used to use them under his pot plants for water," Tetley said

While some things — like the RC Cola can located on one of the console stations — were found on eBay, others had to be recreated.

"At one point there were a lot of people who had the flu — a lot of flight controllers who had the flu. And so somebody painted this mug that says ‘FD,’ which is 'Flu Director.' And so a lady had it, and we lost contact with her for some reason. But Delaney found that mug on eBay, and then she hand-painted that mug based on photographs."

"Those mission roses were always here during launch. And it was very important for them to have that. They never wanted to start the mission unless the roses were here."

Fifty years after that giant leap, Tetley says she's glad people get to see what it took to make history.

"I think what really helped was that we all realized what we were restoring. This is one of the most historic places on Earth. And I think just that admiration, that love and that dedication, really just despite all the obstacles, we just persevered and got it done."